Getting up at 4.30 am is not my usual start to the day but I hadn't slept much anyway with the anticipation of a trip to Dorset to look for otters.  Jane, an enthusiastic local otter watcher had kindly agreed to meet up with me but despite my early start I was still late.  :(

There was a fantastic sunrise that morning but no pictures from me as the 600mm + 1.4x combination I had chosen wouldn't have done it justice.  I hoped for some otters in the sunlit river but it wasn't to be.  In fact it was only when we saw some other photographers that we realised we had missed the start of the fun.  It was rumoured that there might be up to seven otters in the area and I am amazed that we managed to see and photograph and film five or possibly six different animals.  A mother and single cub provided the initial entertainment and then a mother with two cubs appeared upstream.  There was possibly a cub from last year but keeping track of them all became a bit tricky.  The mum and single cub kept close together most of the time although the mother would dive and hunt while the cub waited on the side periodically.  The other family group seemed to have smaller younger cubs and they saw less of their mother and spent more time on the bank resting.  Light was gloomy for most of the time but we had periods of beautiful sunshine which showed their fur coats to advantage.  It was also freezing cold which meant that unbelievably, we had to say goodbye to the otters while they were still very active.

Here are a few of the very many pictures taken that day.

Mother about to enter water with cub 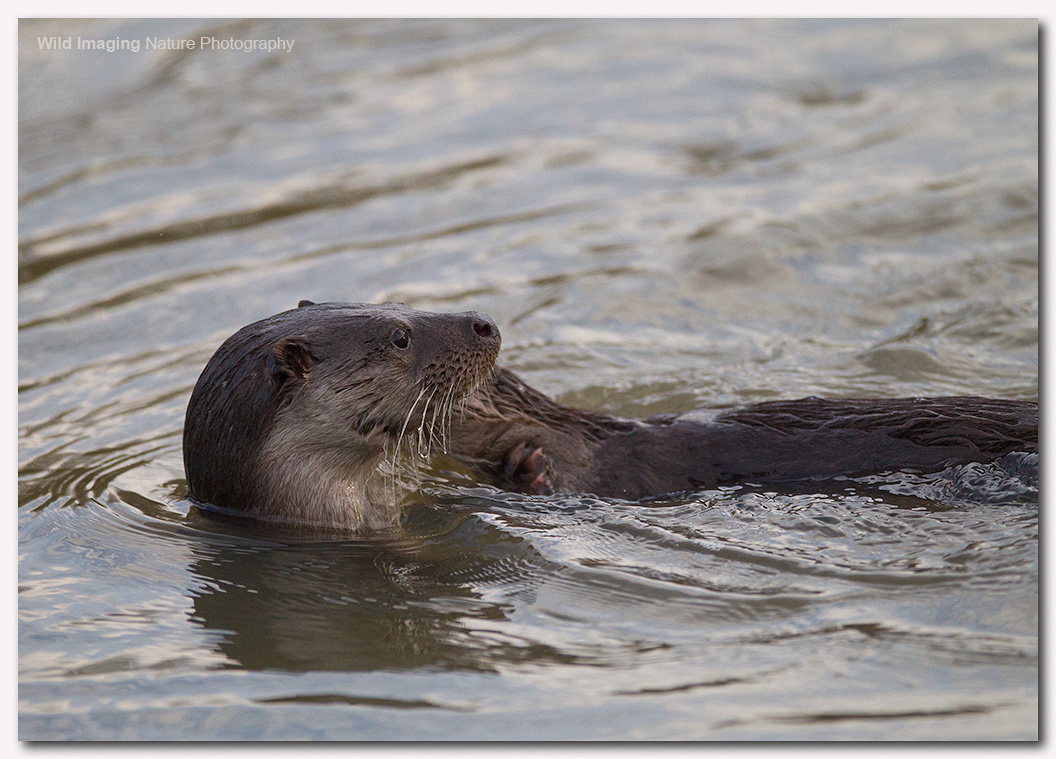 Mother with cub on tree trunk 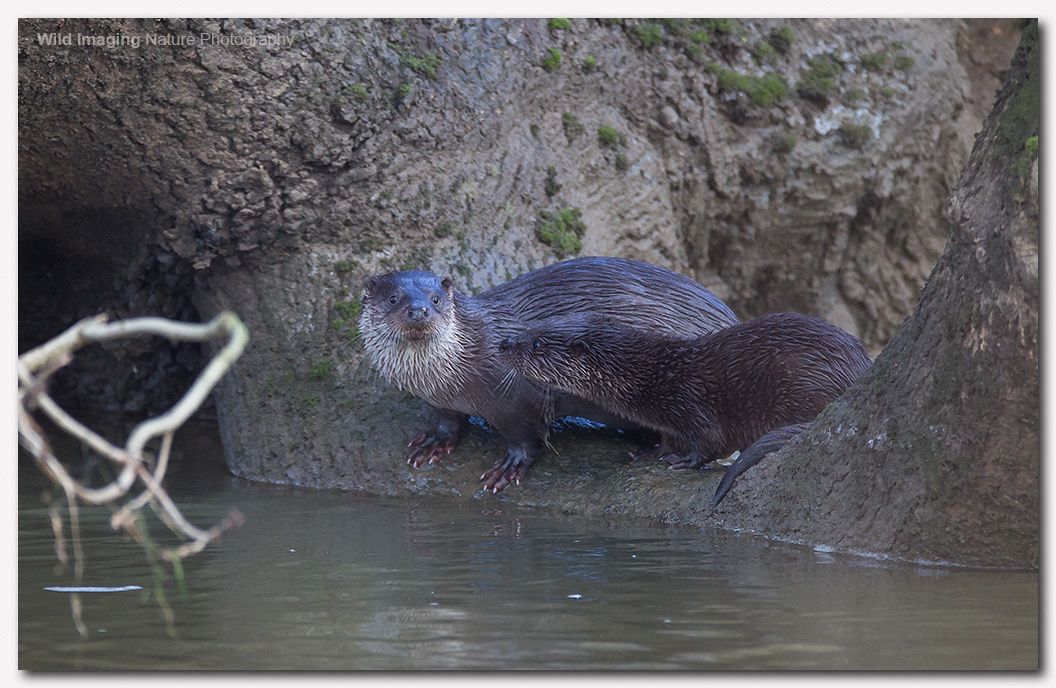 Cub on bank entering water.  Bubbles are from hunting mother. 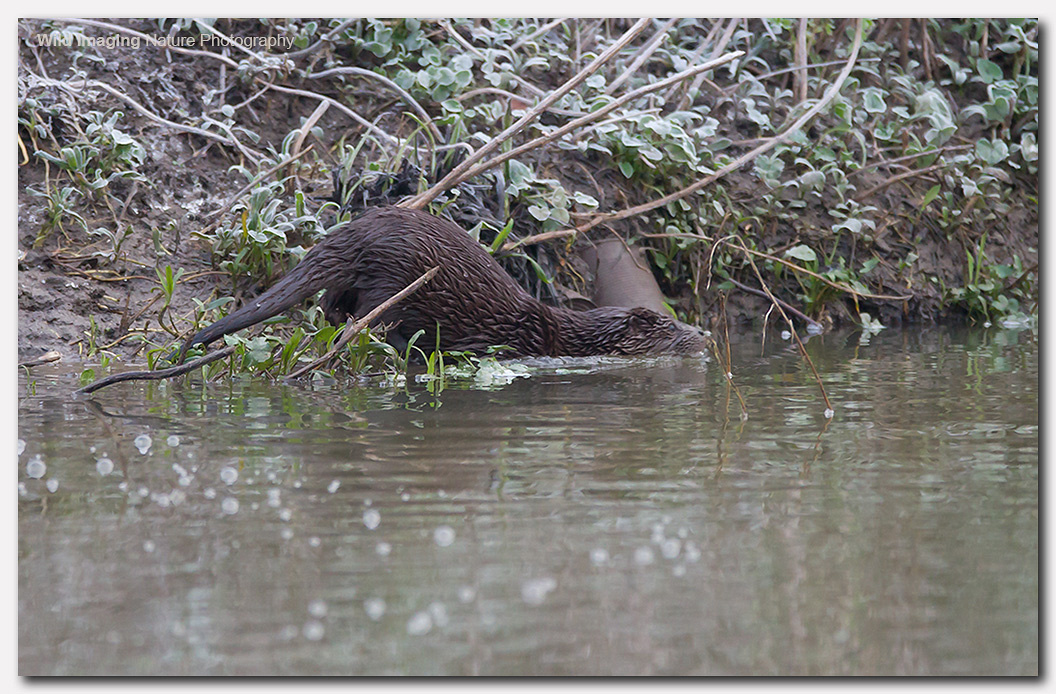 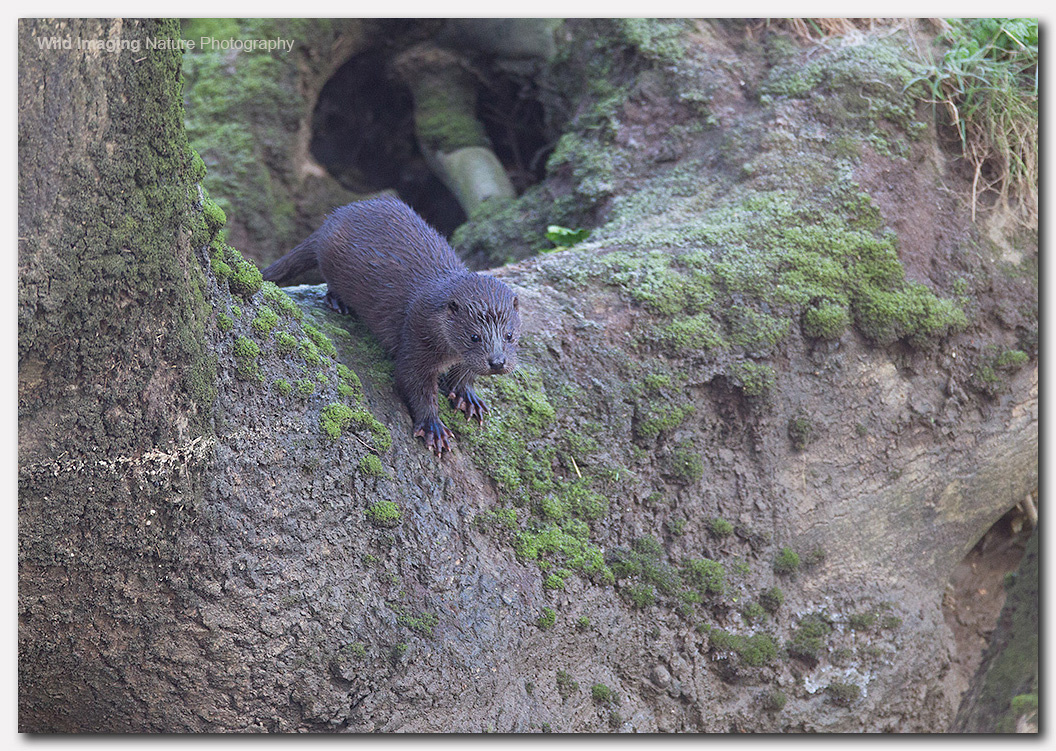 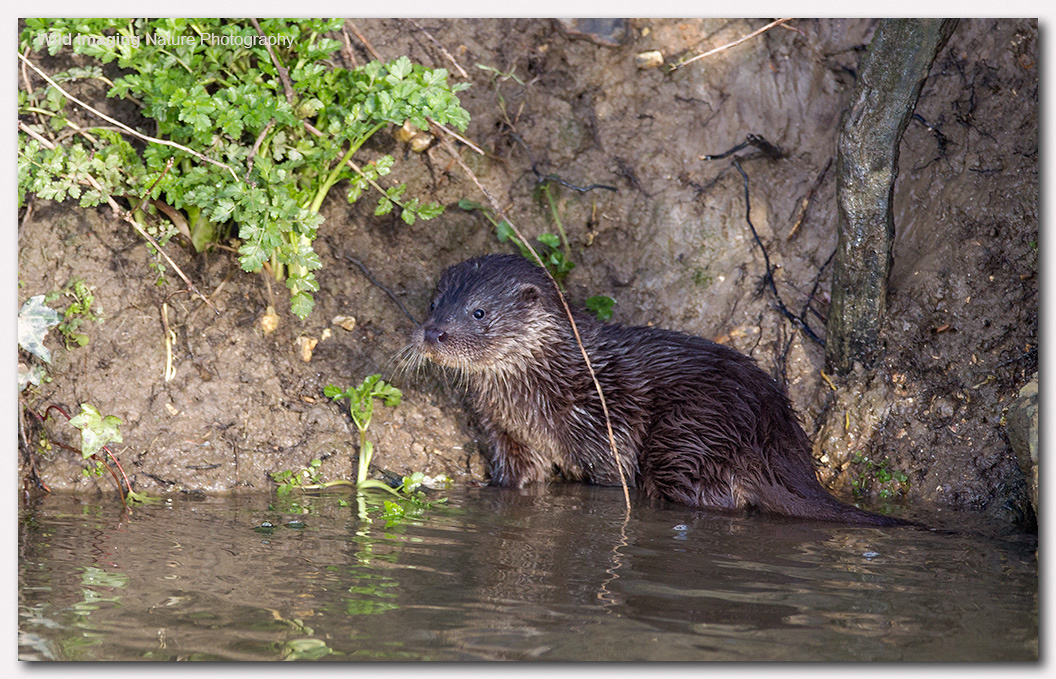 Other things of interest that morning included watching a kingfisher following the otters, presumably waiting for any damaged or dropped fish to appear. 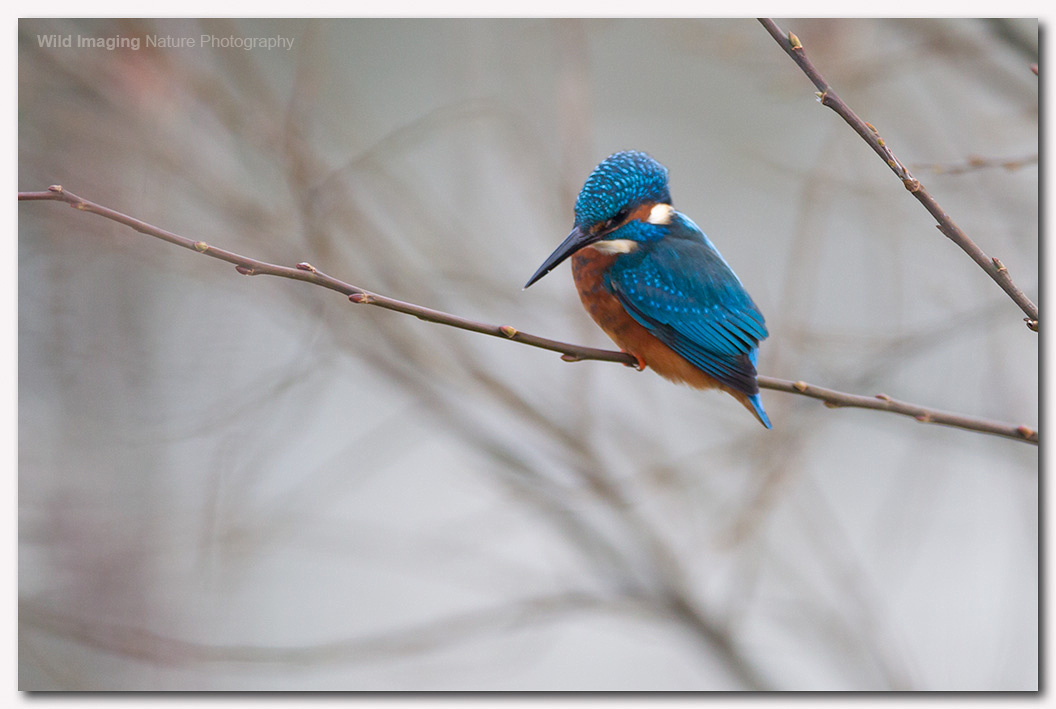 A goldcrest also flitted close enough for a shot. 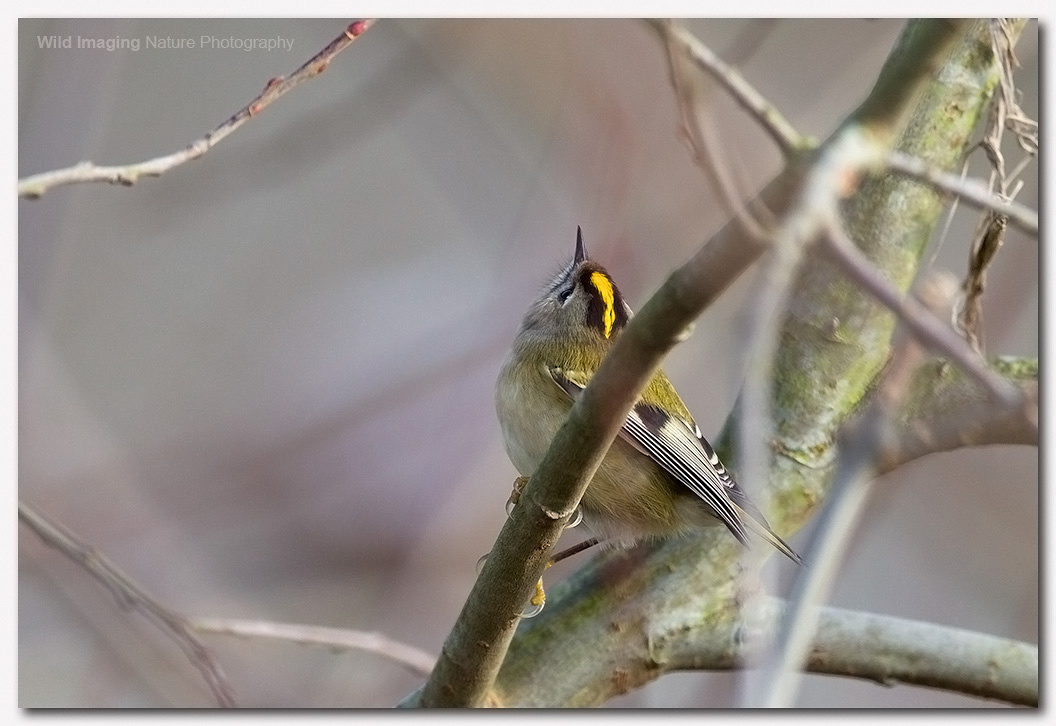 All in all a great day, lots learned and too much to put in a single blog post so more may follow when I get a moment.

John Shackleton(non-registered)
Great shots. I particularly like the cub on the tree - a great reward for getting up early.
WildImaging
Well at least I saw the great sunrise and enjoyed the anticipation for longer than you... ;-)
Mike Hannon(non-registered)
Some excellent shots Tim, so the early start looks as though it was well worth the effort. :-)
WildImaging
Hi Ian

I use centre point with no expansion points - ie the smallest most precise focus mode there is. Using centre point expansion is a recipe for disaster. With a target as small and fast moving as the goldcrest I just try to get the focus point on the bird somewhere and take lots of shots!

Cheers, Tim
Ian Thorp(non-registered)
All beautiful images Tim.
The goldcrest focal range is quite tight, with the branch in front, it is the sort of shot which goes wrong for me. What focusing mode did you use and was the eye or the wing the target?
No comments posted.
Loading...
Subscribe
RSS
Recent Posts
Mr Badger Works for his Dinner How Many Badgers use my Garden Path? A Badger in my Semi-Urban Garden China Trip 2013 - Xi'an and the Terracotta Warriors Woodchat Shrike at Chew Valley Lake 2013 Arctic Terns at Apex Lake, Burnham-on-Sea Beijing and the Great Wall of China Birds Photographed on China Holiday 2013 With Canon SX50 HS White Fronted Goose at Sharpham on the Somerset Levels Twite at Aust Warth
Keywords
Somerset Badger Bushnell Trailcam Bushnell trailcam Shapwick Heath NNR RSPB Lodmoor great white egret Peanuts Bridgwater
Archive
January February March April May June July August September October November December
© WildImaging - All Rights Reserved
Powered by ZENFOLIO User Agreement
Cancel
Continue