Before the memory of our China holiday fades any further, I think I'd better get up the rest of our photographs and memories.  The last blog post dealt with Beijing and the Great Wall of China and it was with regret as well as excitement that we moved on to the next phase of our fortnight holiday.  Our tour guide left us at one of the giant railway stations in Beijing, installing us in the correct train in a sleeper compartment for an overnight trip to Xi'an.  The scale of the the station was everything you'd expect of such a huge and populous city and we could readily believe that this was the main mass transport system for the country.  We had a 'soft' sleeper compartment with 4 comfy bunks.  The 'hard' sleeper compartments had 6 bunks each and less padding but many people travelled vast distances on hard seats. 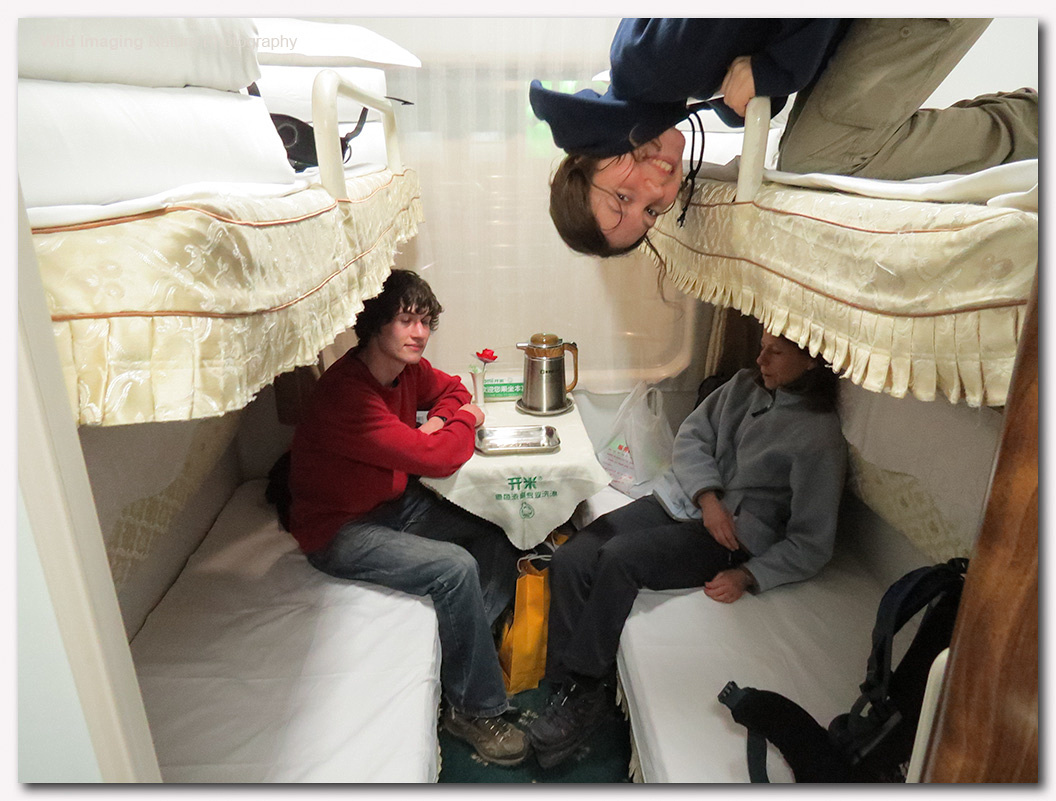 The train arrived early enough for us to be able to go to our new rather characterless hotel in time for breakfast and a shower before setting off to see the terracotta warriors.  These were discovered quite by chance in 1974 when some local farmers found 'body parts' while digging a well on their farmland.  The story is summarised well on Wikipedia.  When the importance of the find was realised, the might of the Chinese bureaucracy swung into action, further sites were uncovered and all the important areas were covered with large well-lit barn-like structures and a museum.  Another very Chinese feature is that before tourists like ourselves were allowed to visit the site, we had to be taken to a factory where reproductions for export are made together with a multitude of other artefacts of interests for collectors of trinkets.  Below is the local equivalent of the seaside 'hole in the picture' photo opportunity where we were all encouraged to pose... 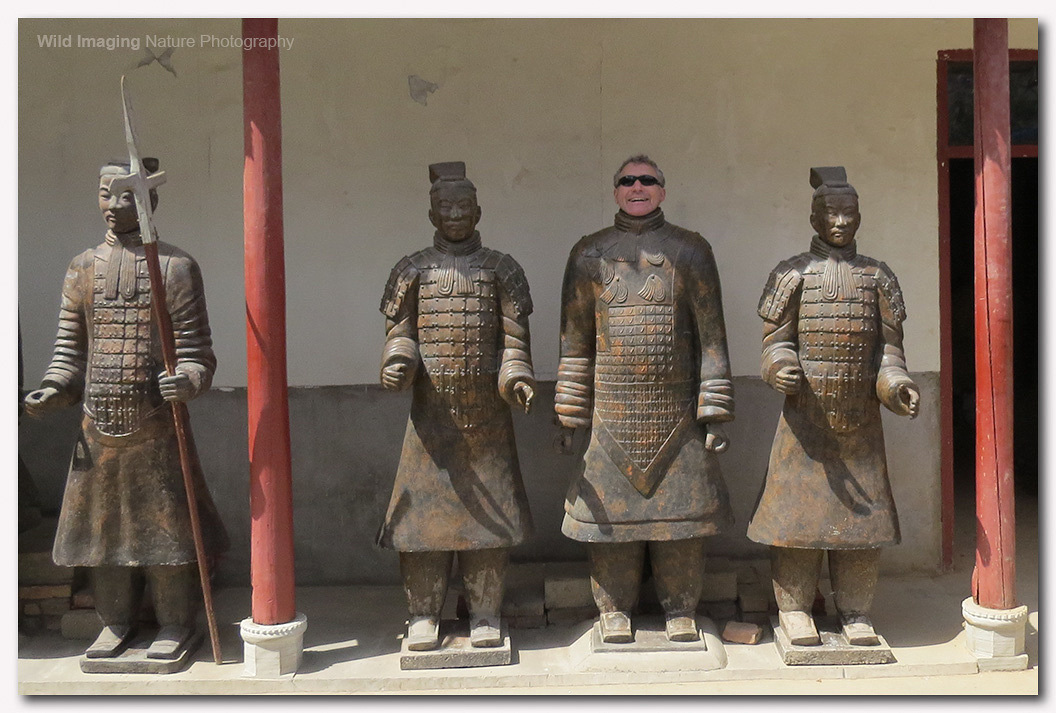 The actual site was of course also well provided with shops and restaurants and this area clearly boasted a thriving fur trade.  Whilst avoiding these shops, I was pretty sure that the largest pelts on sale were from long haired German Shepherd dogs and many had been dyed different colours and with odd patterns.  Here is a small selection of pictures of the archaeological site. 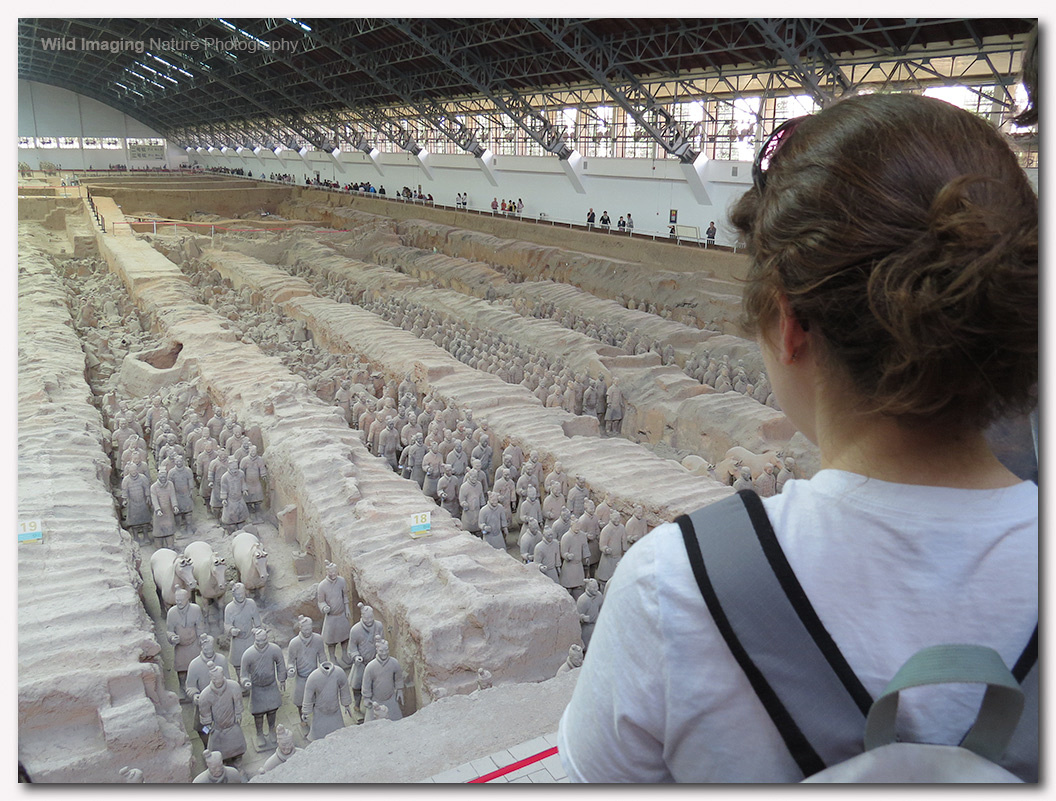 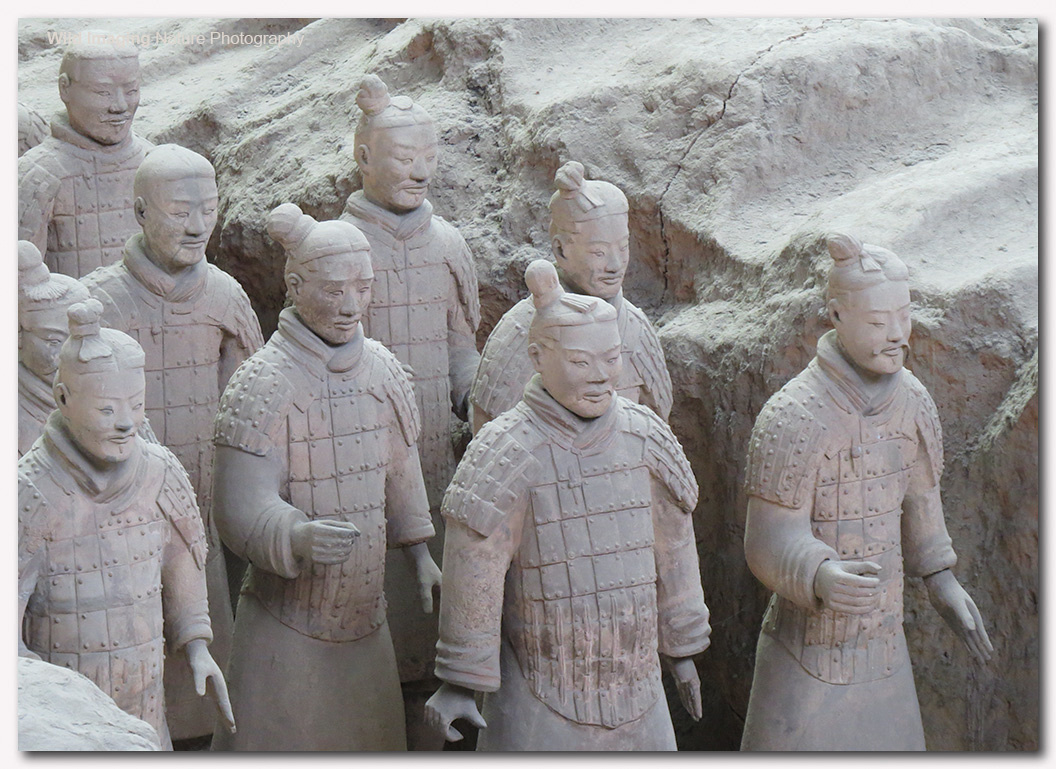 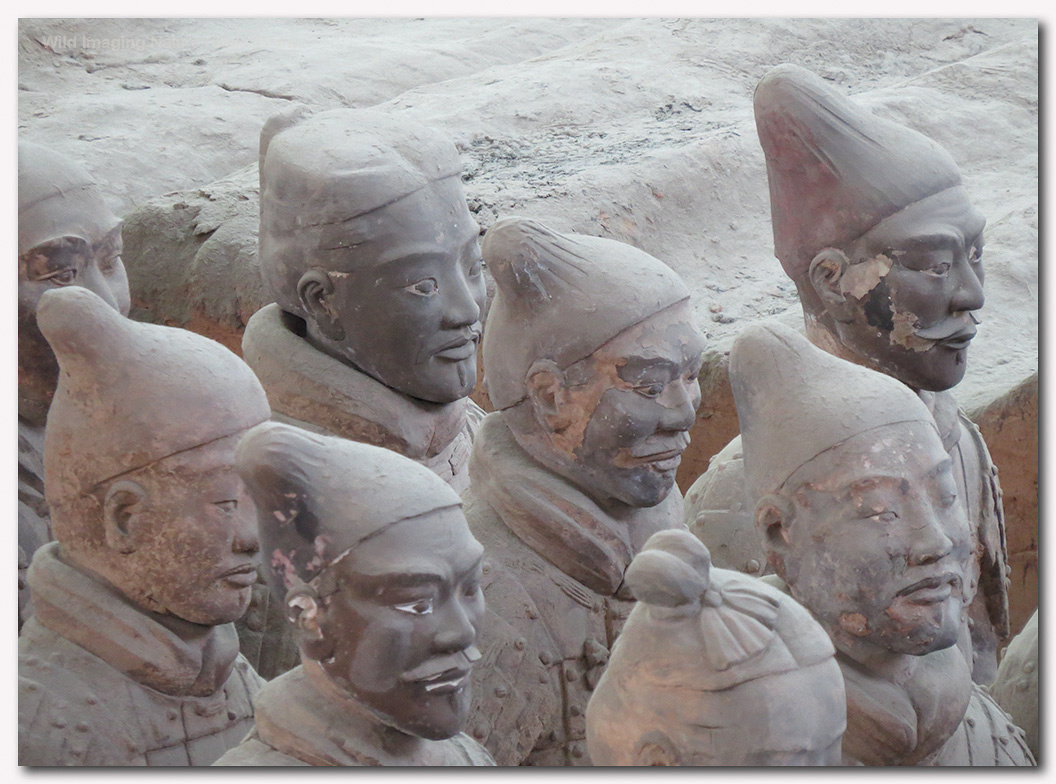 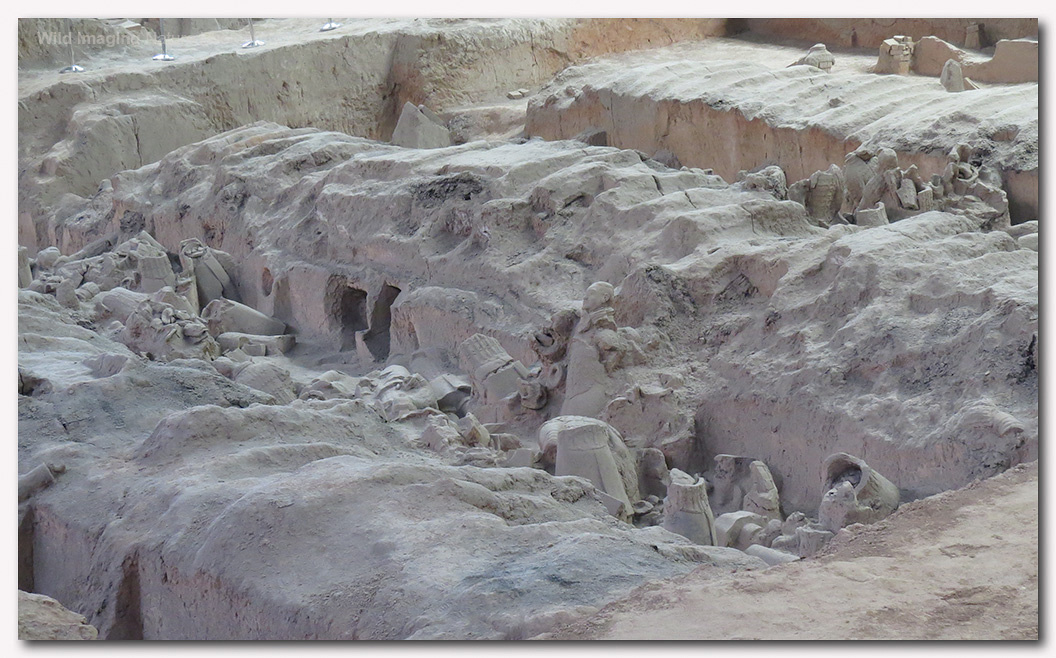 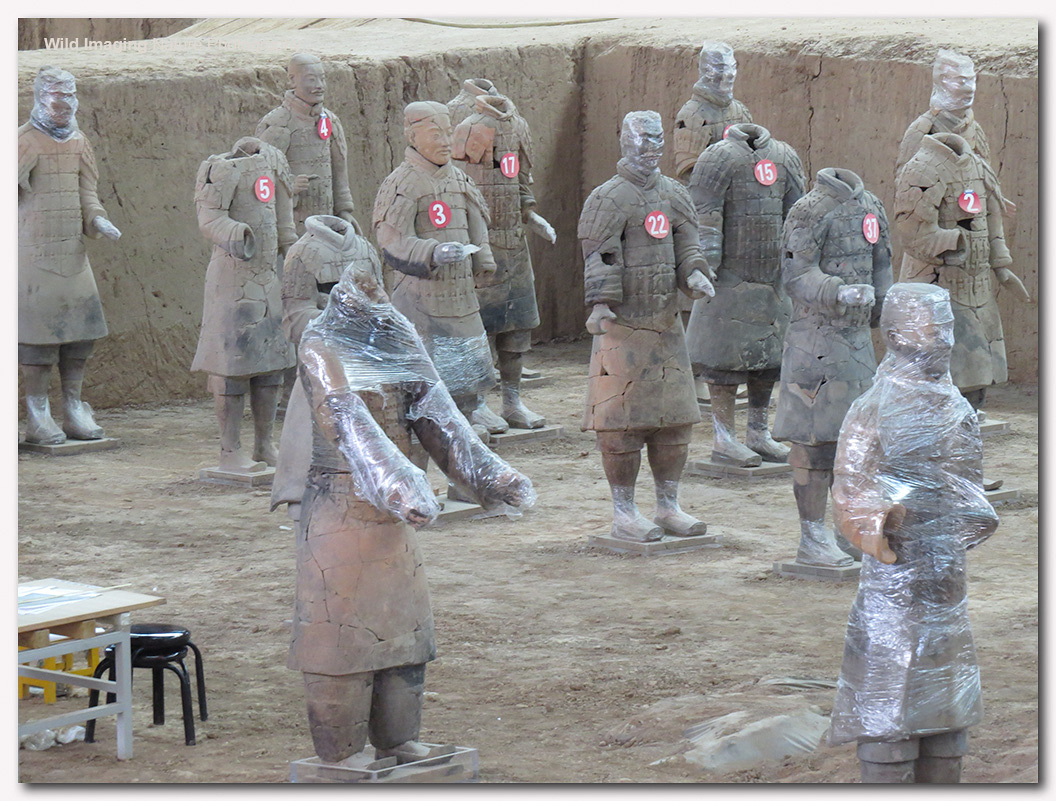 Here's a view of the repair shop where the fragments of warriors are reassembled into a whole.

Let's not forget the horses - the army had to be able to travel and to mount its cavalry. 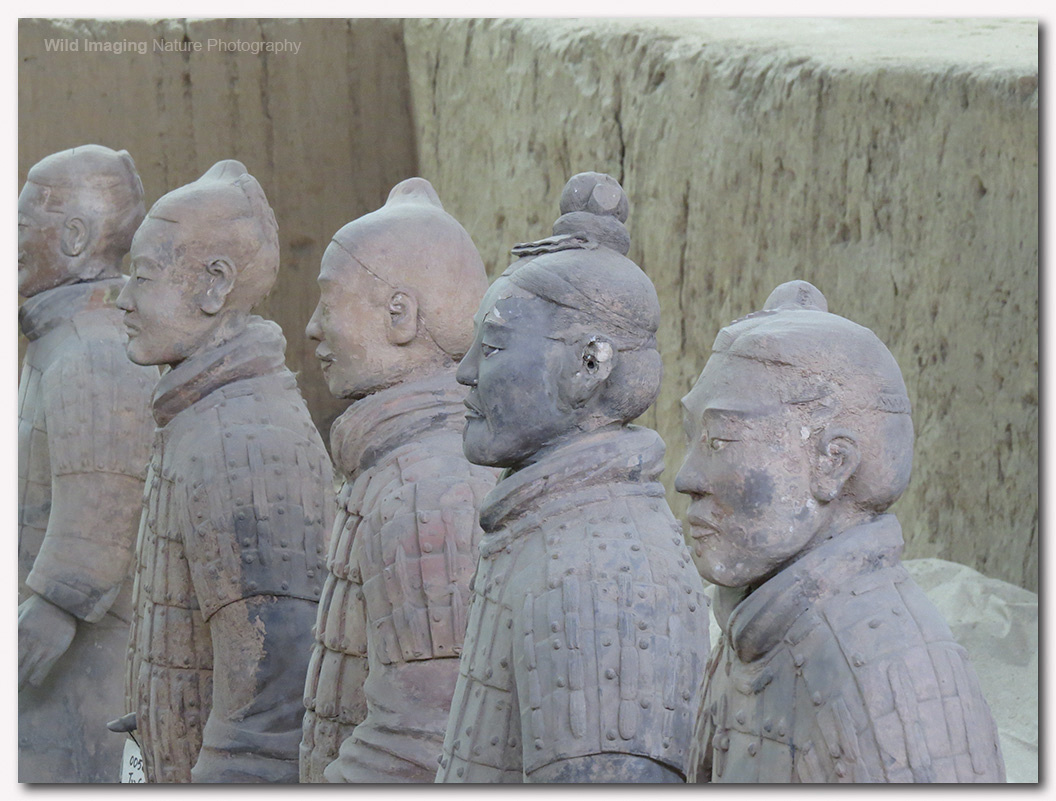 Within the museum, the atmosphere was enhanced with gloomy lighting and they showcased some of the different types of statue.  This standing archer is tall slim and fit.  The more senior figures by contrast had fancy clothes, hats and pot bellies.  Some stereotypes seem to persist to this day.  :) 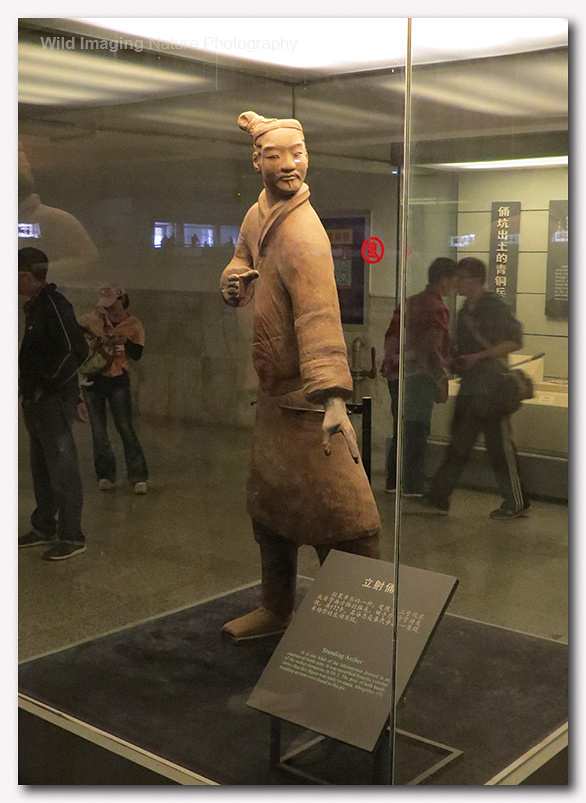 Quite nearby, as if to upstage the incredibly detailed work of the potters, half size bronze chariots were found.  These, like the terracotta figures had been damaged by landfalls and possibly by human hand but these had also been painstakingly reconstructed.  The level of detail in the metalwork was extraordinary and the bridles, manes etc were all made of individual metal pieces. 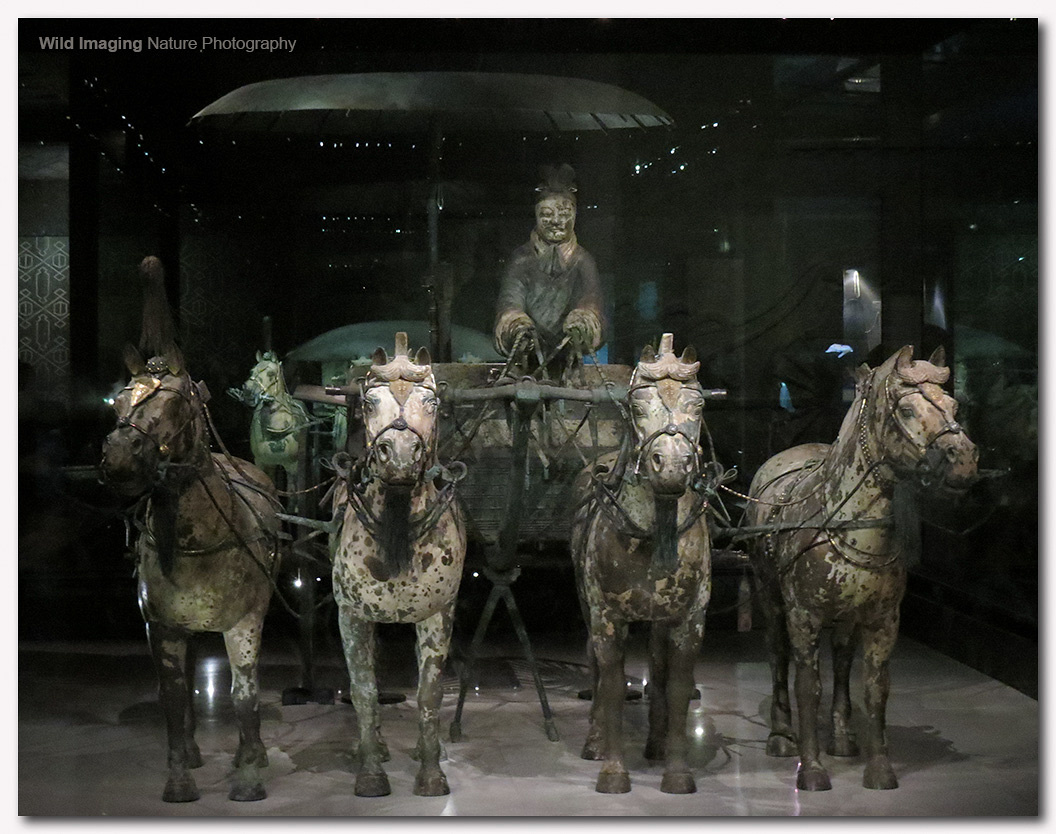 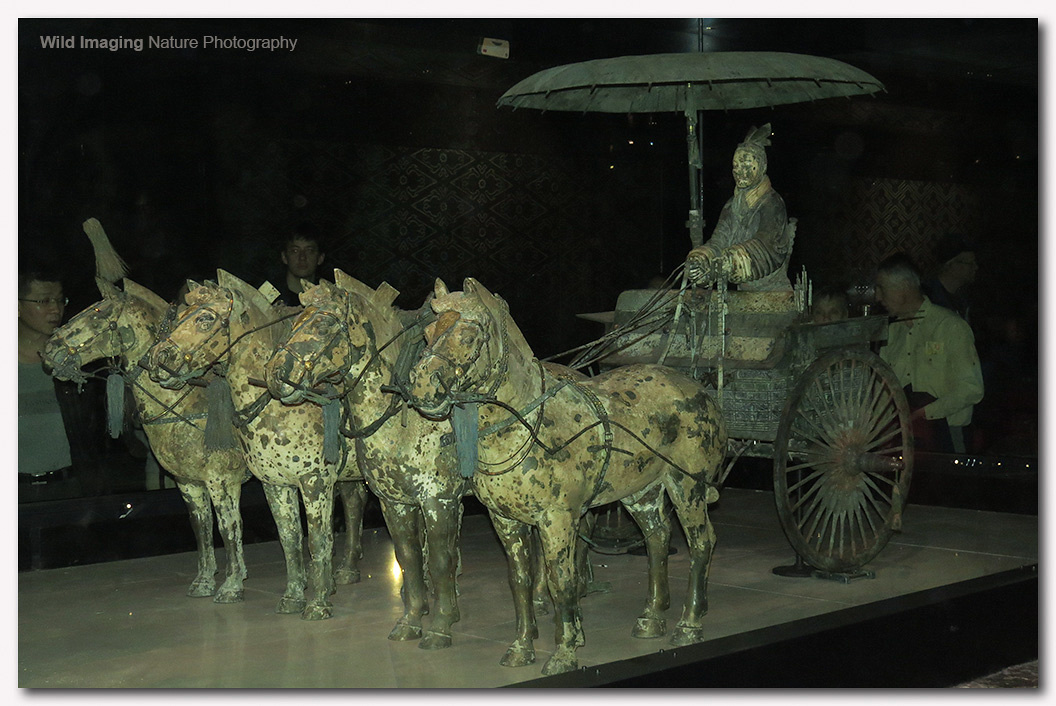 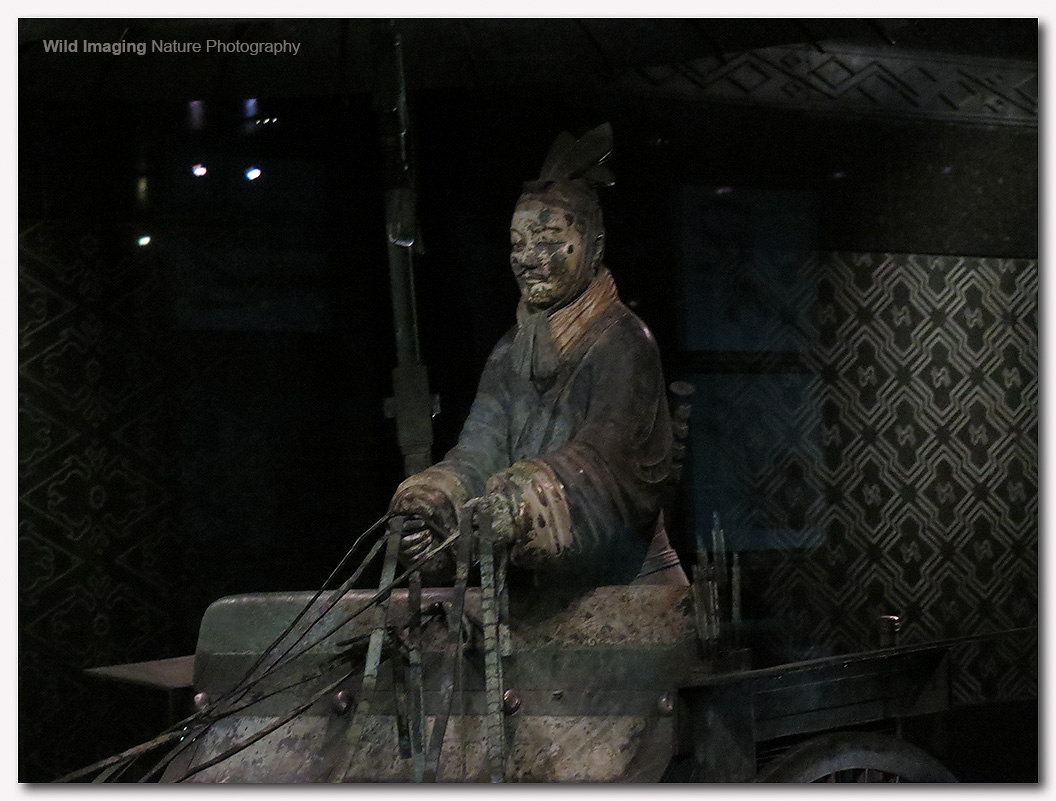 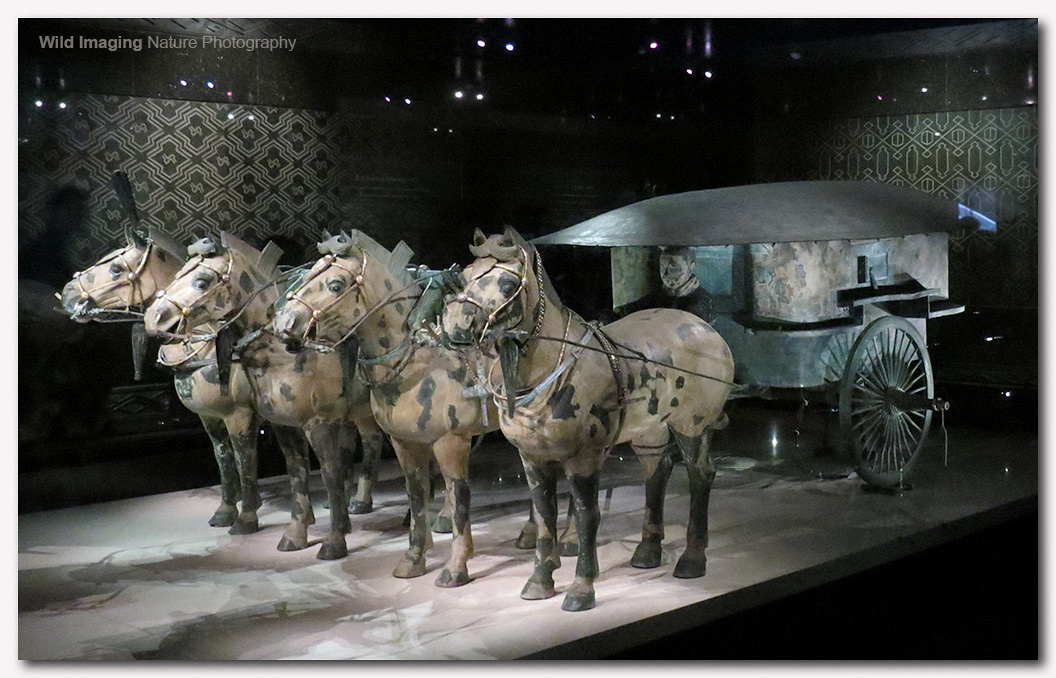 The city of Xi'an itself was at one time well preserved but has now been largely redeveloped with the compulsory tower blocks everywhere you look.  There are a few exceptions.  There is an intact city wall about 9 miles long in a rectangular configuration.  You take your life in your hands crossing busy roads to get to the entrance and to be honest there's nothing to see from it except the sides of tower blocks through smog.  There are various temples, one of which we visited but the highlight beyond doubt is the Muslim quarter famous for its street food (yum) and trinkets (didn't look).  We ate for virtually nothing and loved it and loved the people.