Beijing and the Great Wall of China

Growing up in Hong Kong as I did must have helped me feel at home faster than the 'average' European tourist visiting a bustling Chinese city.  The impact of the very busy roads, pollution, colour, sights and sounds is quite extraordinary.  There is change in evidence wherever you look.  In Beijing, as well as skyscrapers all around, there is another element to the skyline of giant cranes building taller towers and at ground level, old buildings being torn down as the base for still more high rises.

We stayed at the Bamboo Garden Hotel, an island of tranquility at the edge of the ancient Hutong area of Beijing.  Here's a picture of part of this very pretty hotel after dark. 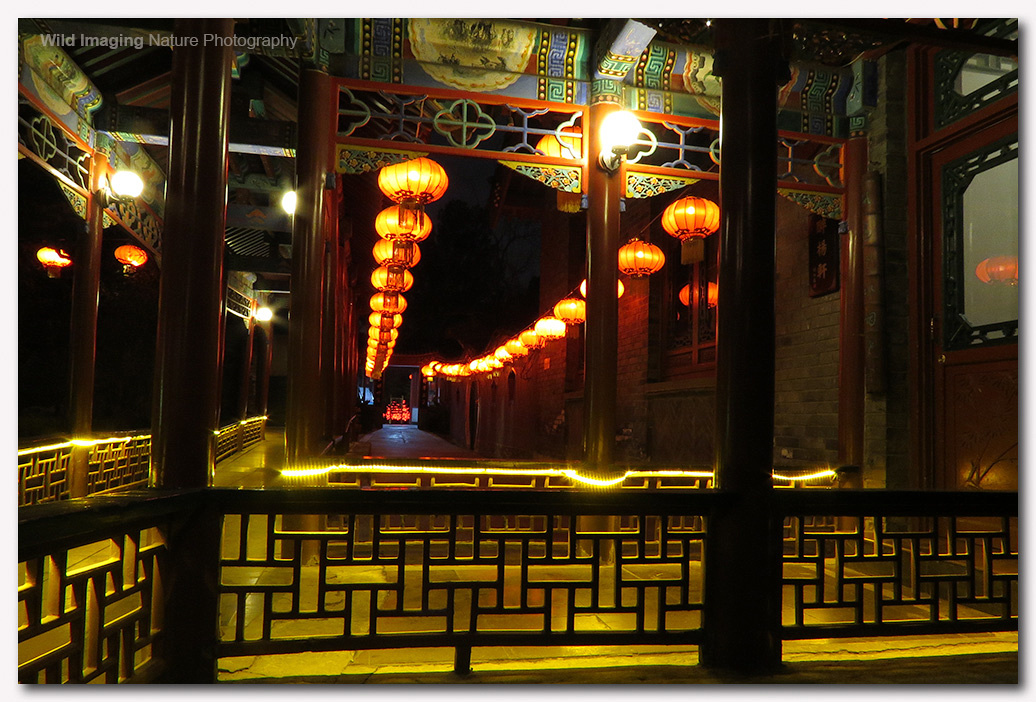 Whilst we had guides arranged for part of our China trip, often the highlights were the islands of unstructured time wandering around the streets, sampling food from small shops and stalls and watching the bustle of local life.  All of the areas we wanted to see were within a 3 mile walk of the hotel and we spent many happy hours tramping the streets. 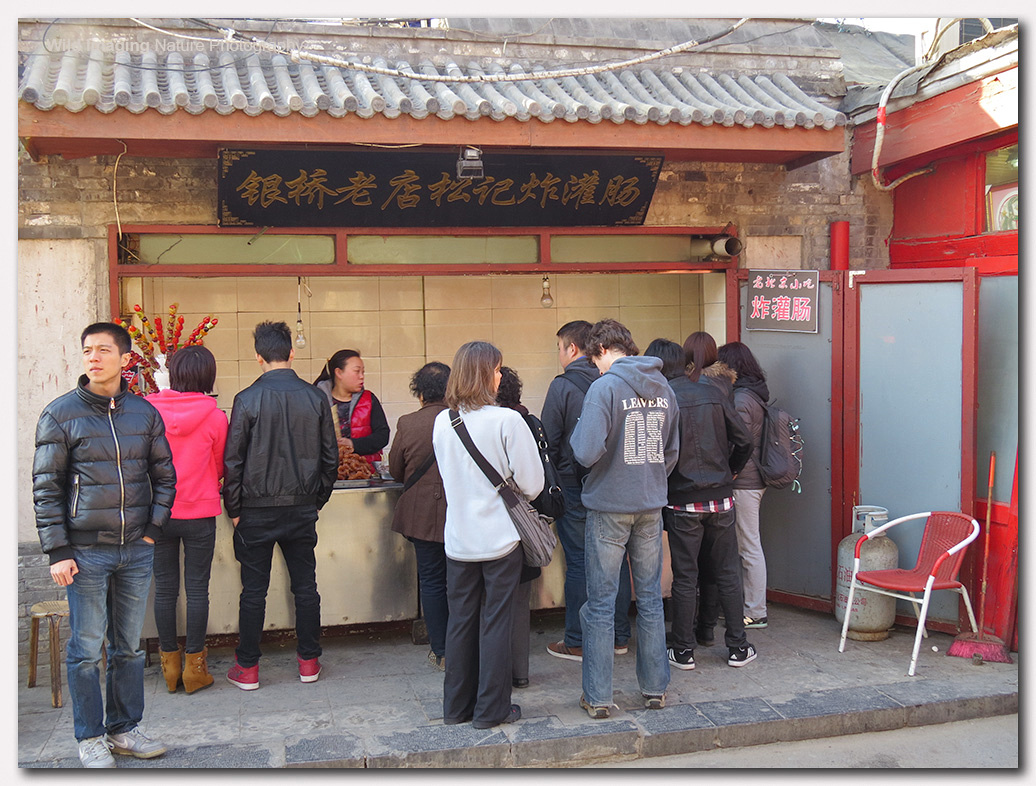 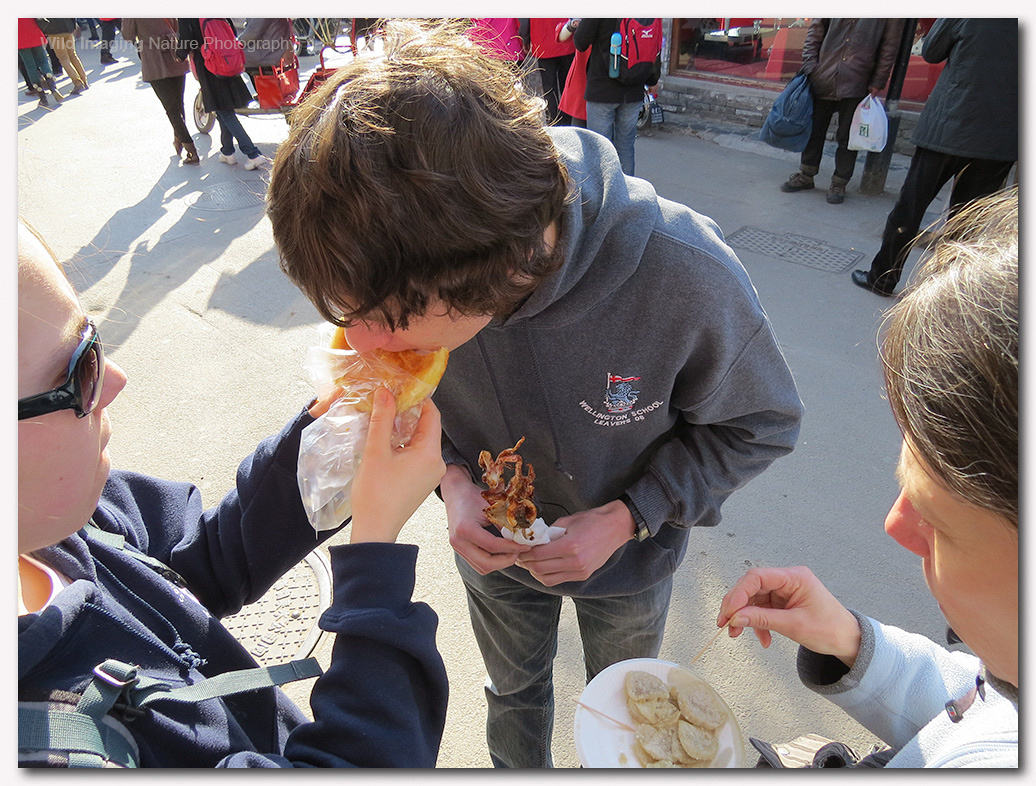 The risks of eating street food did not escape us and neither did we escape the bugs.  Two out of the four of us had stomach upsets at some part of the two week trip and three had colds.

One of the greatest pleasures for us was seeing how many adults went either on their own or in company to the many parks around the city to take exercise or sing and dance together.  What might have seemed childish or embarrassing to us was just part of normal life and adults of all ages seemed to take part.  Some of the activities were very unfamiliar - eg walking and suddenly shouting out at intervals exercised lungs and legs, one man walked briskly round a lake with his arms held out aeroplane style and clearly hurting, others put their legs through gaps in bars and massaged their muscles against the steel tubes.  Many areas that looked at first like children's play areas in fact turned out to be adult outdoor gyms.  Here a picture of three of us on a leg exercising with William, the most athletic of the four of us, looking down. 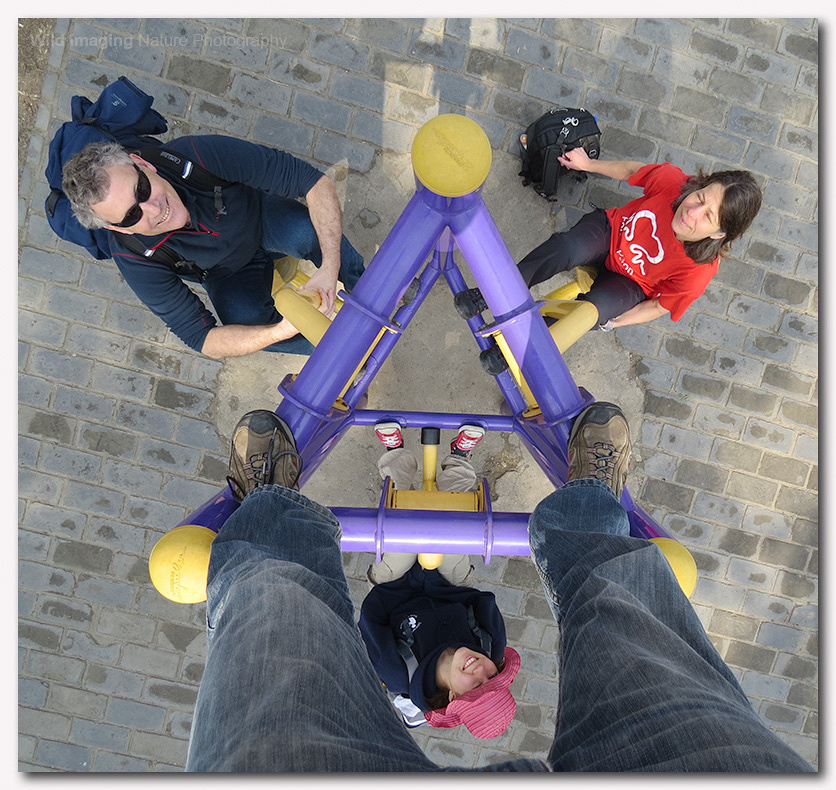 Exercising is a serious and communal activity in Beijing

We saw surprisingly few people doing Tai Chi but we encountered a diminutive little chap who must have been in his 70s doing a Kung Fu type routine.  He was delighted to be watched and was even more delighted when William did a little routine that he has been learning as part of his Chinese University language course.  Katy then managed a cartwheel/flip and Margot and I contributed encouragement and applause.

Getting back to the serious business of sightseeing, we had a day hiking along the Great Wall of China.  What an amazing structure and history to go with it.  At its longest period it spanned 10,000km.  Currently much of it is absent or derelict but we had a great time walking along a well restored 10km stretch little used by tourists and had it almost to ourselves.  Paul, our young guide was very knowledgeable and very fit and walked the same stretch five times in the week we were there!  We were lucky with the weather but the haze meant the photos won't win any competitions.  Here's a selection of the better ones. 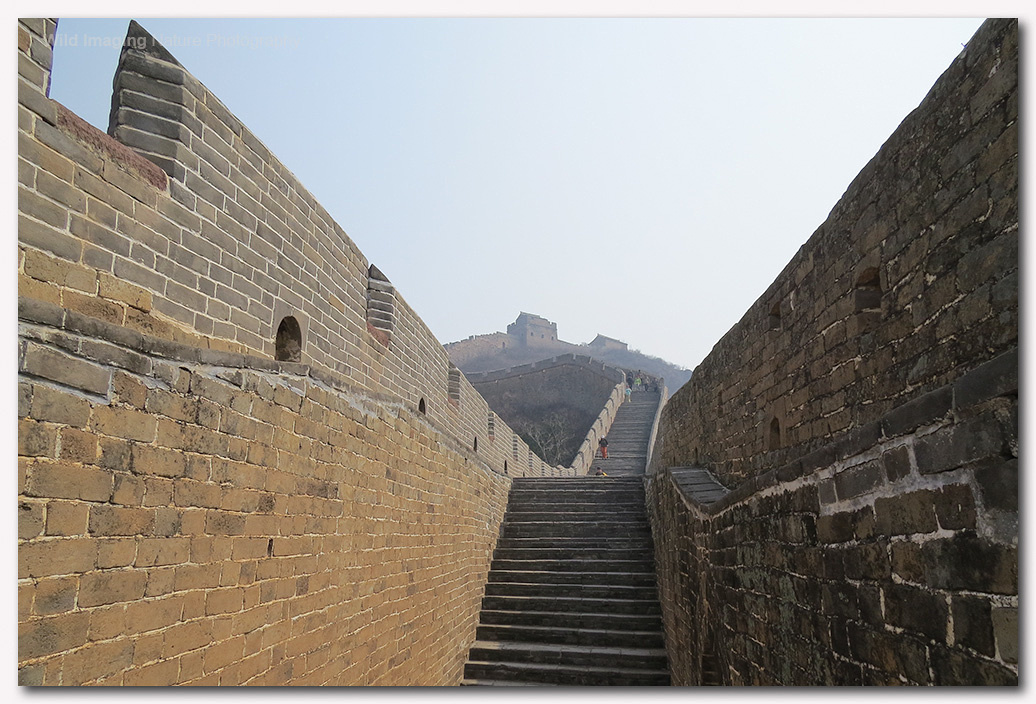 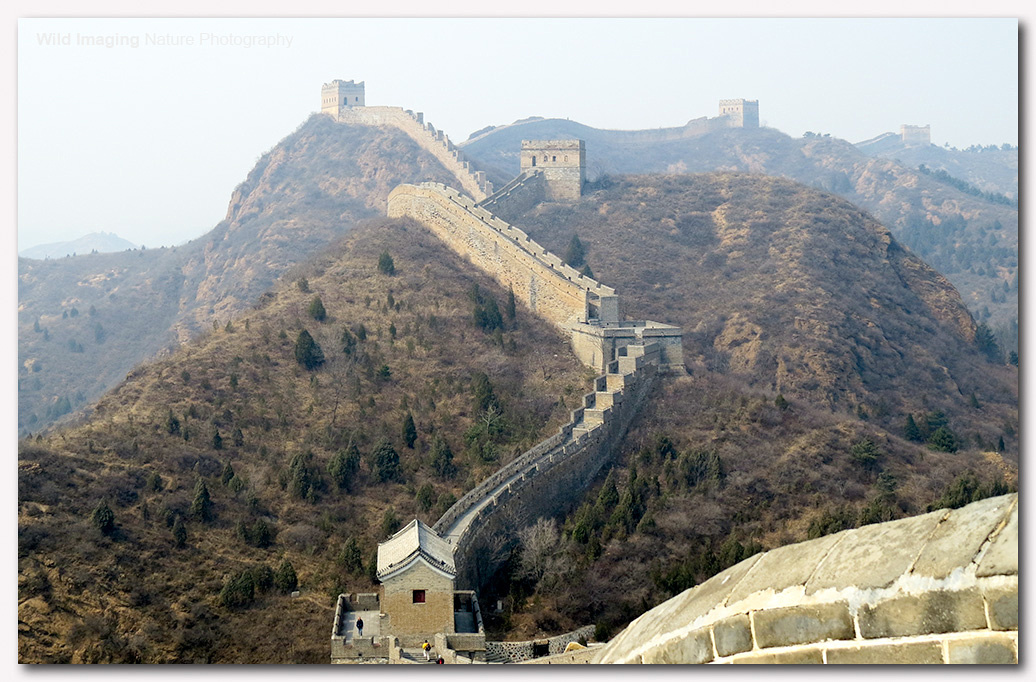 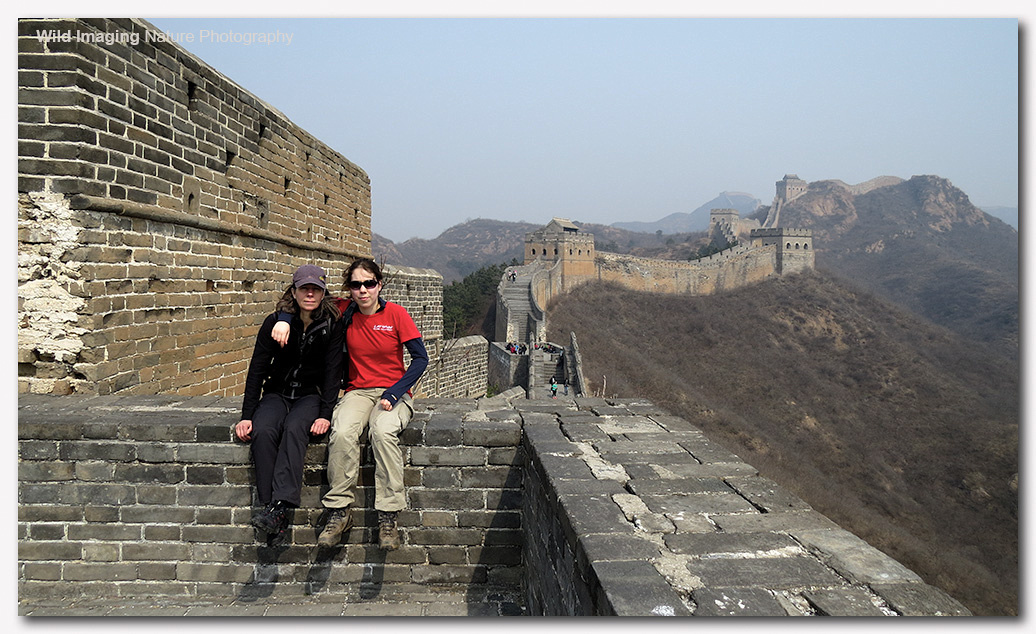 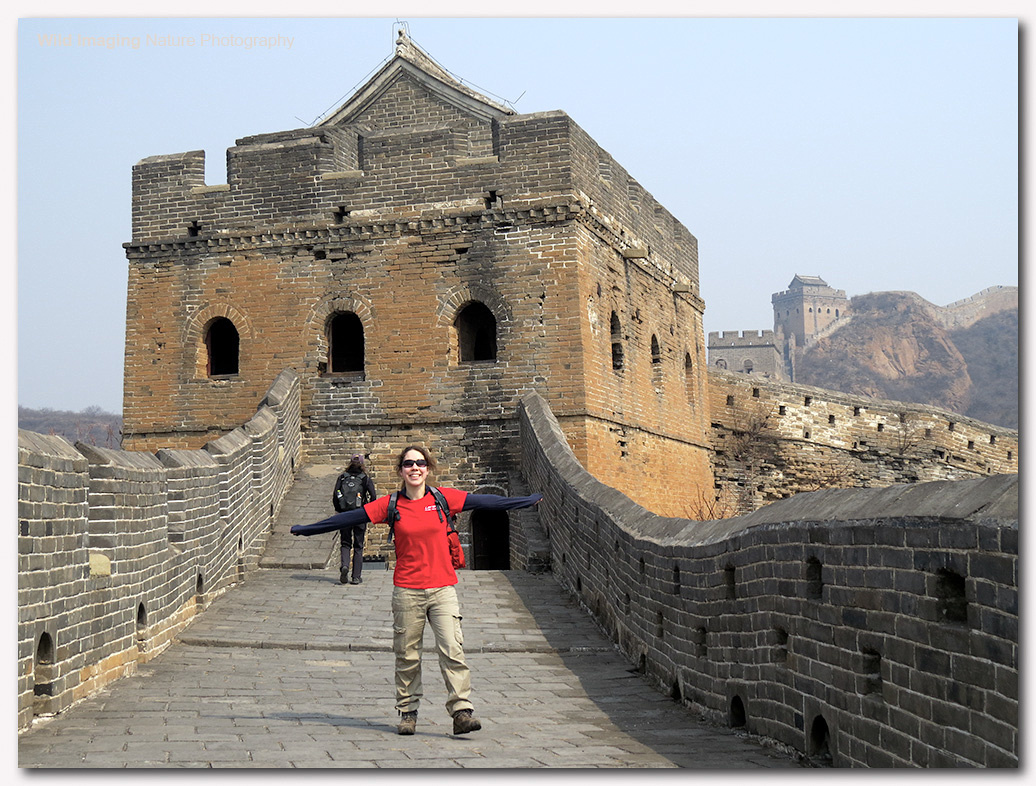 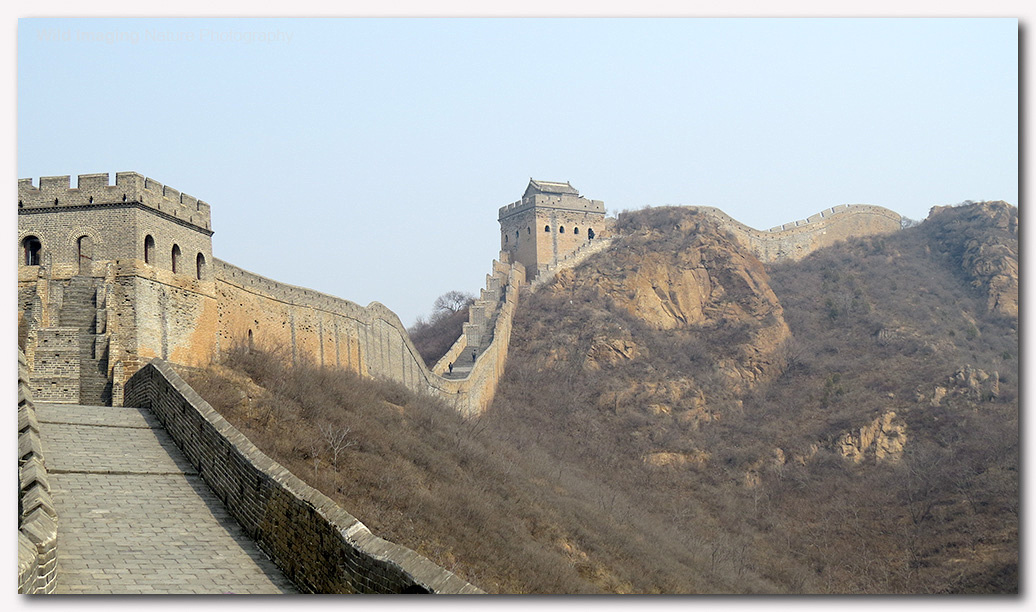 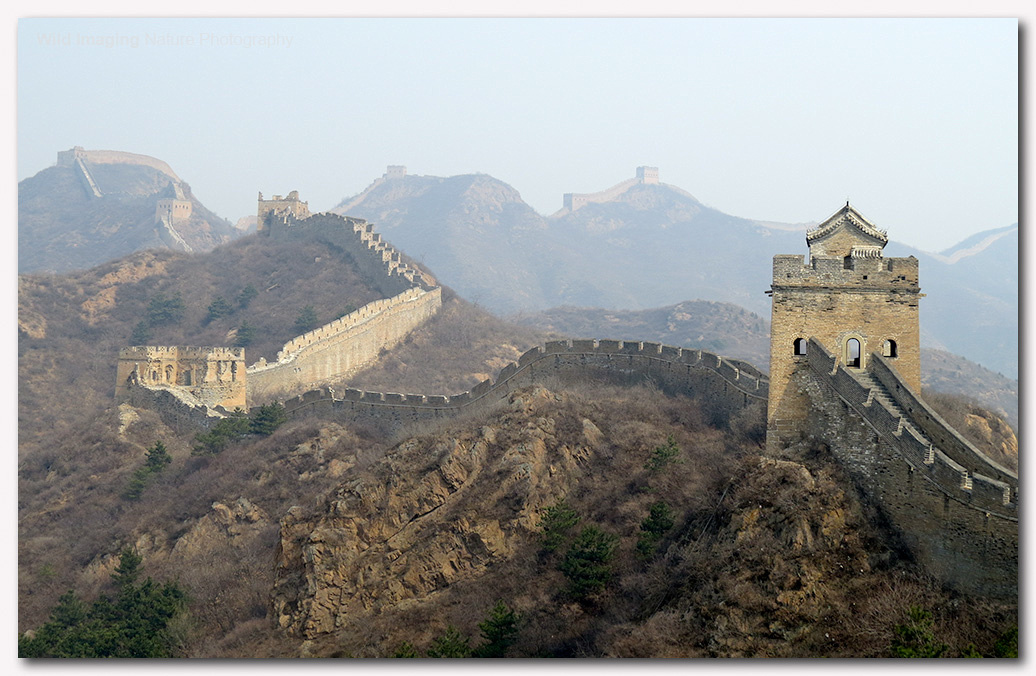 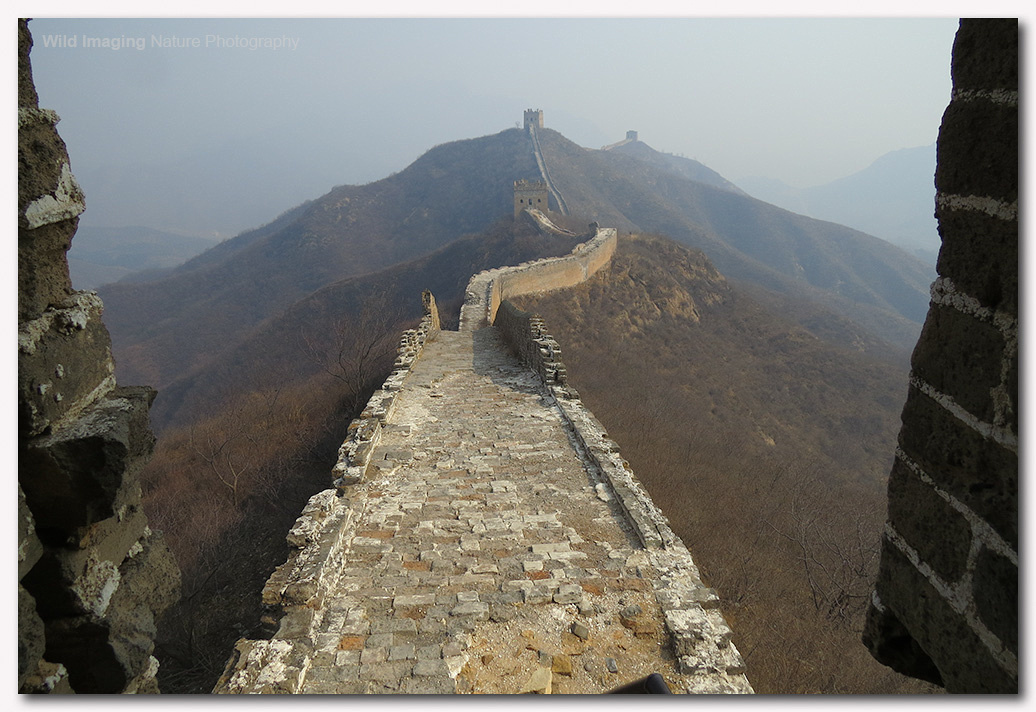 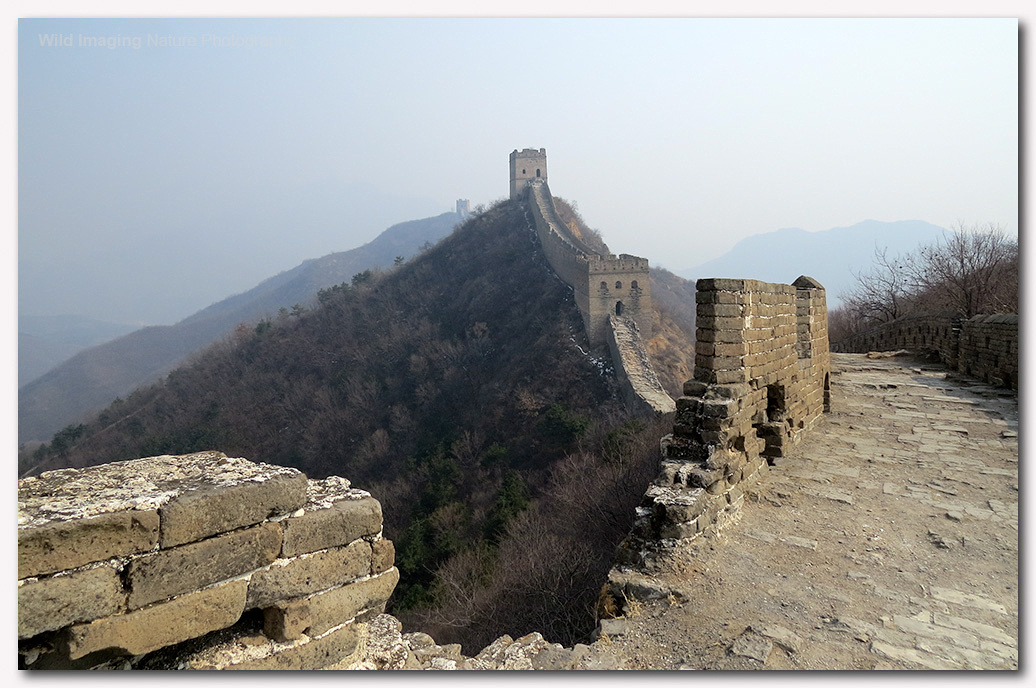 You'll see that this final picture has wall missing and a badly paved surface.  Most of my family and friends know I'm not much good with heights and there was a particularly steep uphill section with a poor surface and no walls 100m on from here (visible) which I had a real problem getting up.  Eyes fixed on the ground, hands and feet gripping on and not talking to anyone.  Phew, I still feel sweaty thinking about it.  I hasten to add there was no danger!

A little more about food in Beijing before some more sightseeing stuff.  It's said of the Cantonese in particular that anything with four legs that isn't a chair or a table, anything underwater that isn't a submarine and anything that flies but isn't a plane is fit for the table.  We didn't go to Canton but there was plenty of evidence of unusual foodstuffs nonetheless. 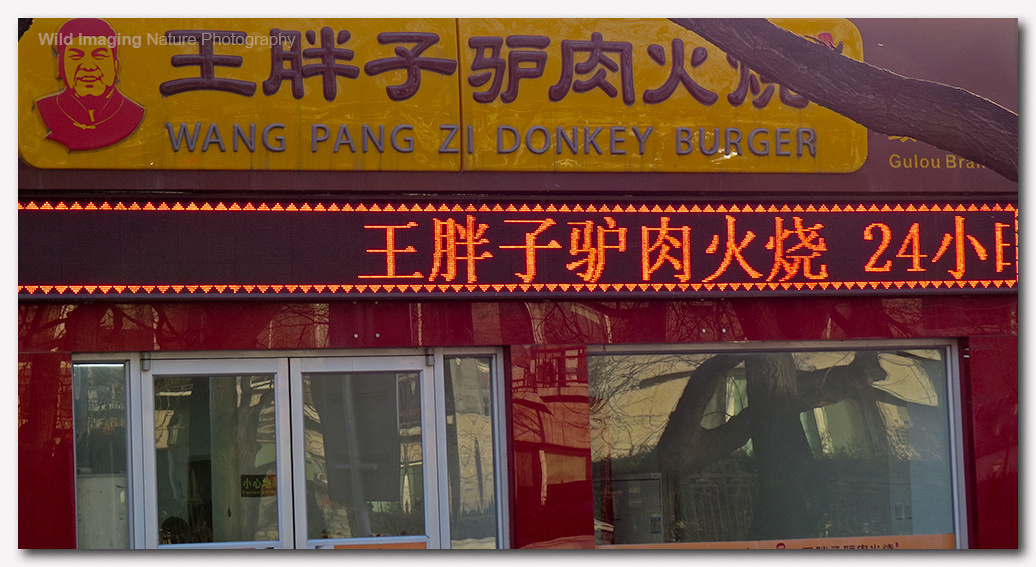 It appears this is one of a chain of donkey burger outlets.  There's no misunderstanding, we checked the Chinese characters as well.  Other places reminded us of home but rather more honest than our own outlets about the nature of their food... 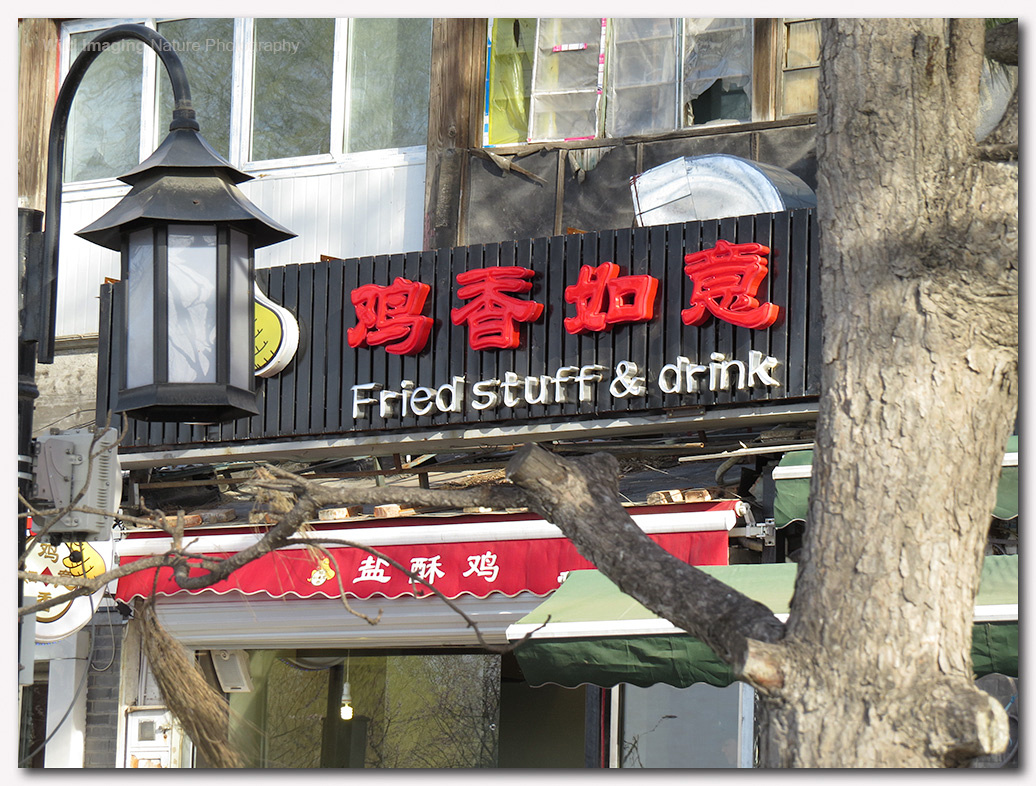 
Sightseeing in Beijing itself can never be complete without a trip to the Forbidden City.  Surrounded by a large moat and massive walls, the interior is a mix of huge courtyards and temple-like structures and an area of courtyard-style houses and narrow lanes.  It is all in pretty good condition and there is evidence of continual renovation.  You could easily spend a day looking around with a guide but that's not really our thing and we walked through fairly briskly avoiding the main crush of tourists and taking a few pictures. 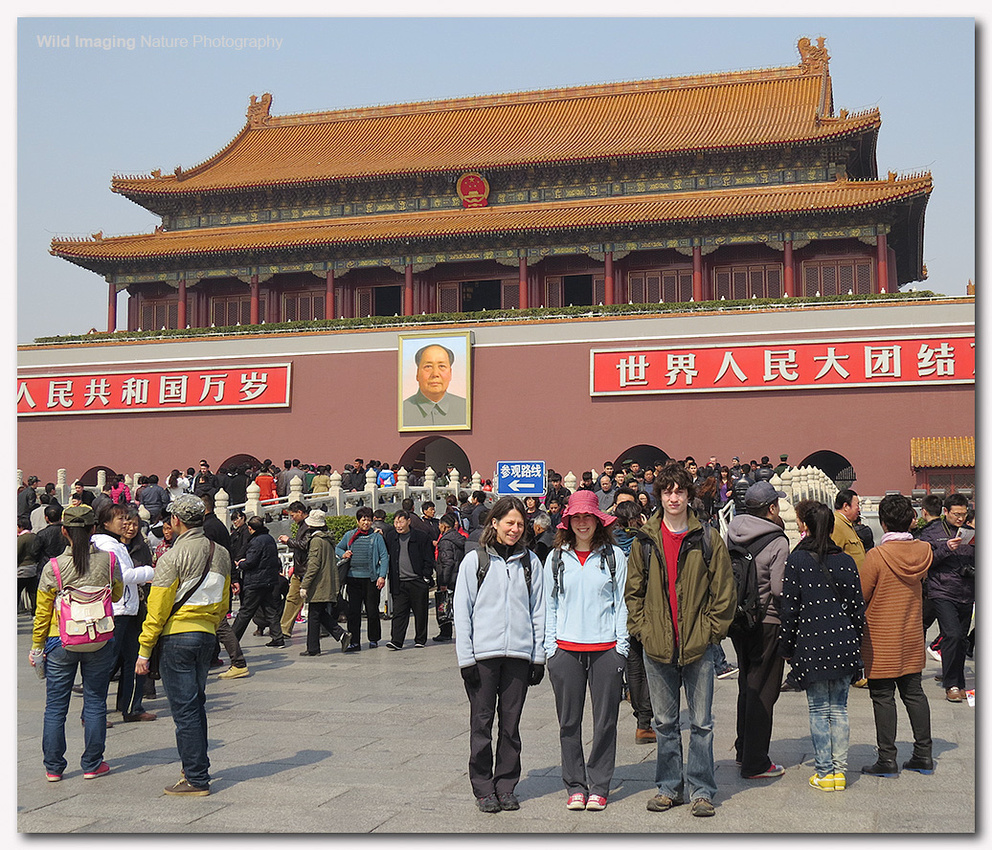 Entrance to the Forbidden City 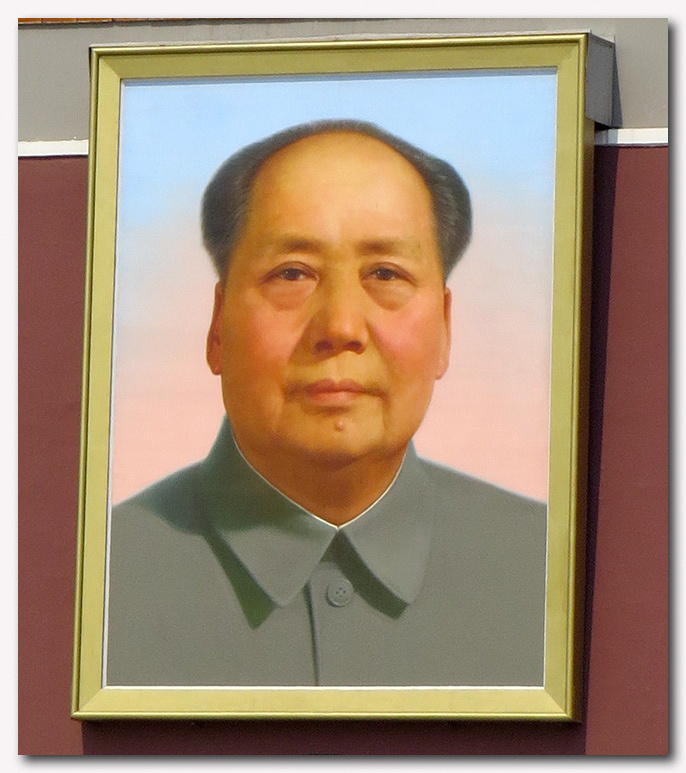 While Mao looks calmly over the hordes of visitors to the Forbidden City, he seemed fairly irrelevant once inside the ancient structure. 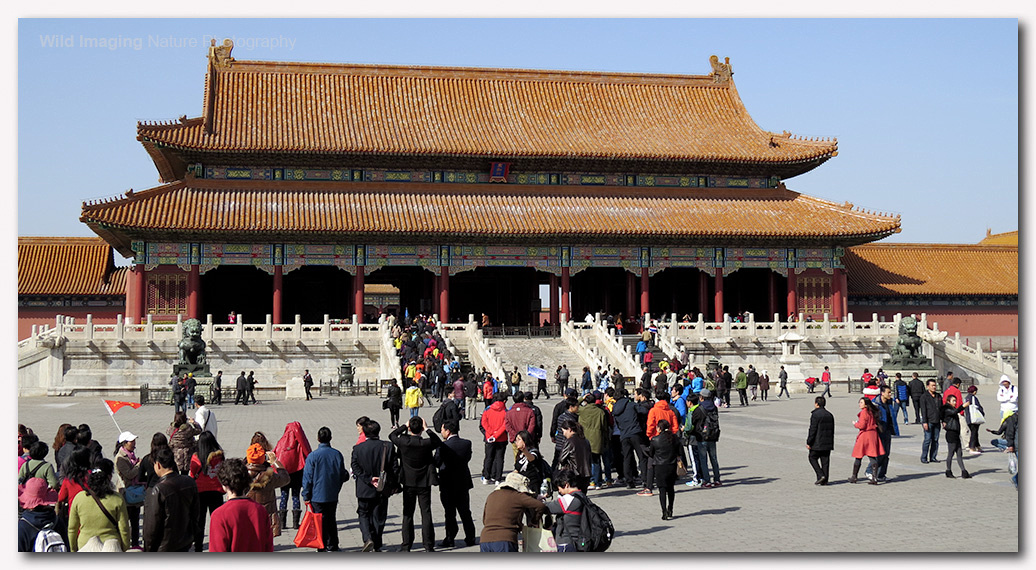 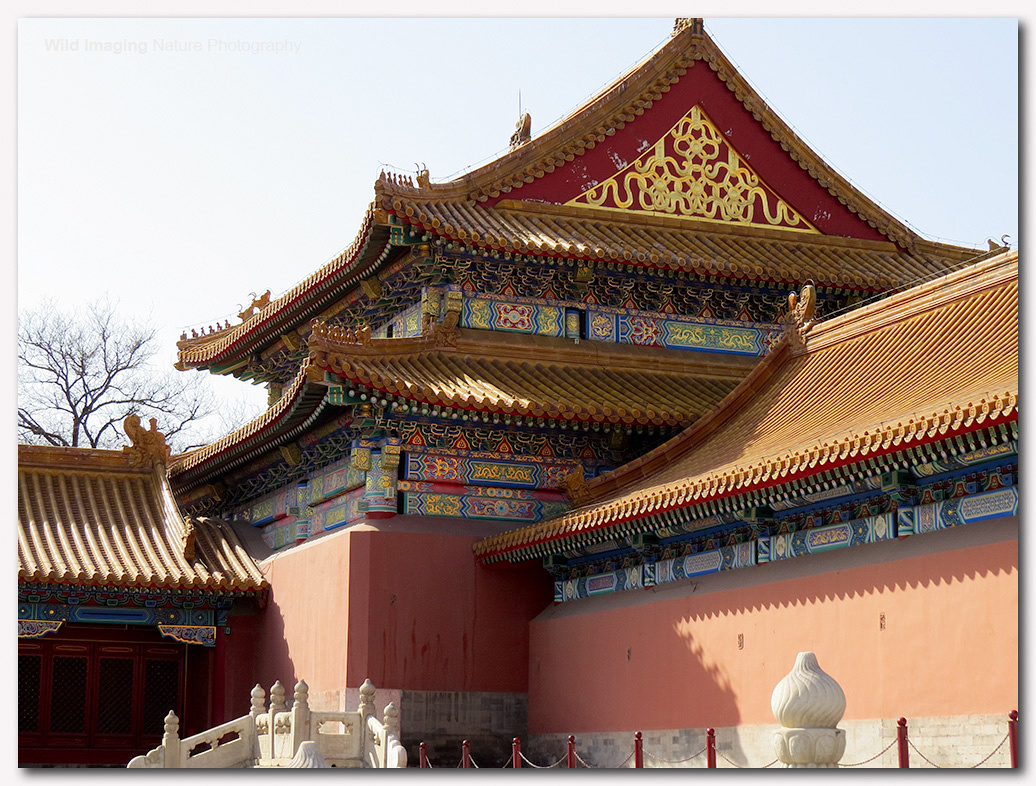 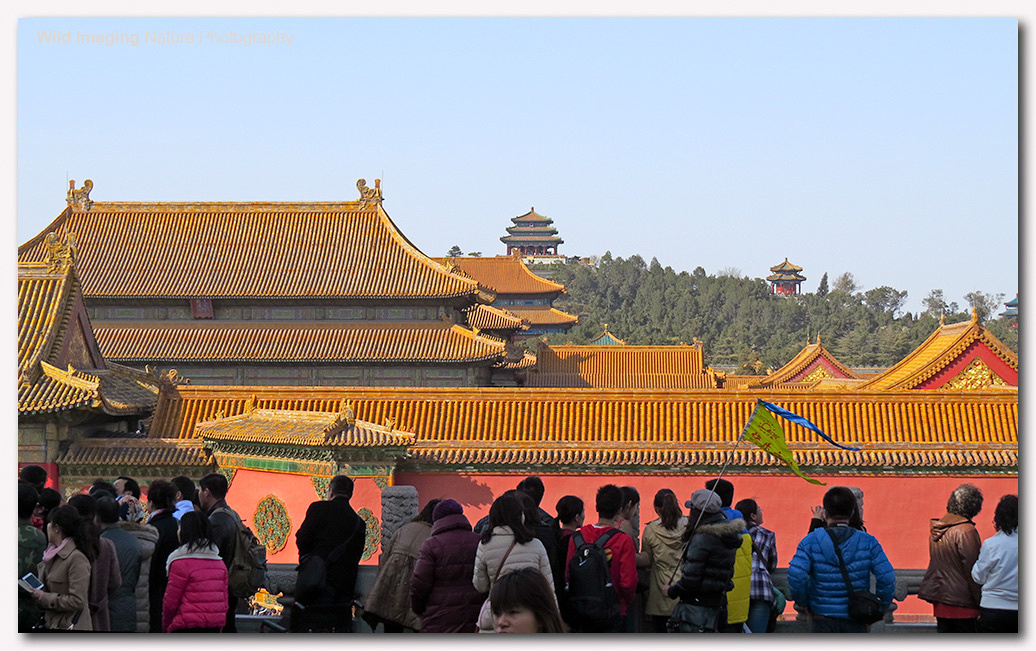 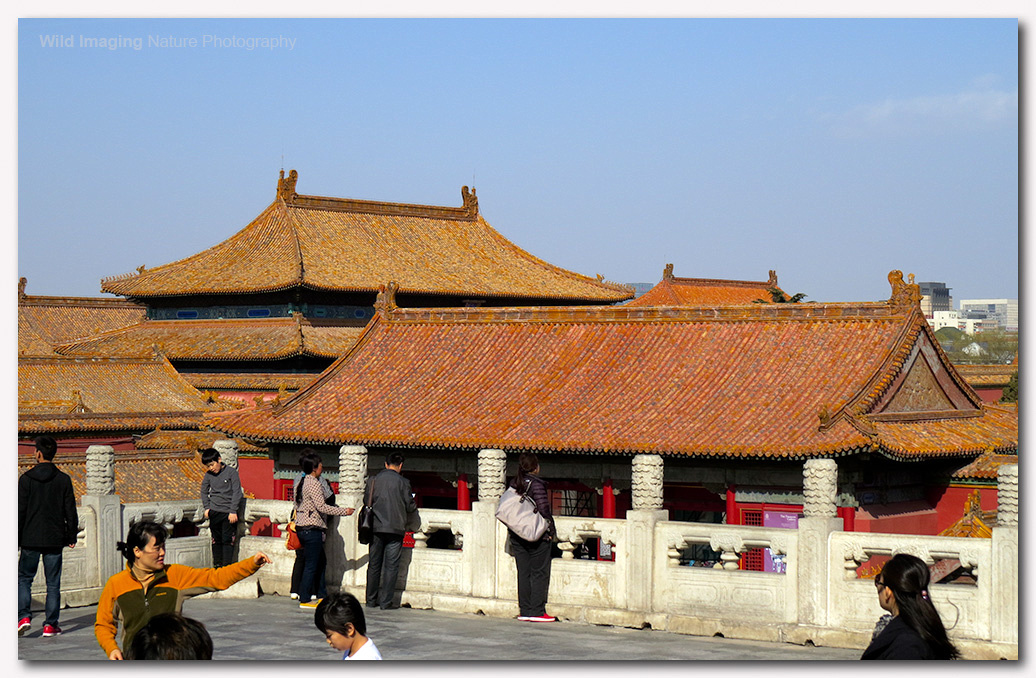 Outside the southern entrance to the city is Tiananmen Square which is a truly massive area.  A photograph would need to be wall covering size to do it justice.  This is three wide angle shots stitched together in photoshop.

Looking down on the Forbidden City from the Buddhist temple in the park to the north shows the smog that the inhabitants of Beijing have to put up with on a daily basis.

One thing that many people will recognise is the love of the Chinese people for posed photographs.  My family and friends will already have noticed far more pictures of our family included here than normal which is a sort of tongue-in-cheek nod to the practice in China.  A new twist to the theme which I hadn't encountered before is the practice of taking pictures in costume often depicting scenes from history or Chinese Opera.  We managed to persuade Margot and Katy to join in the fun at the temple overlooking the city. 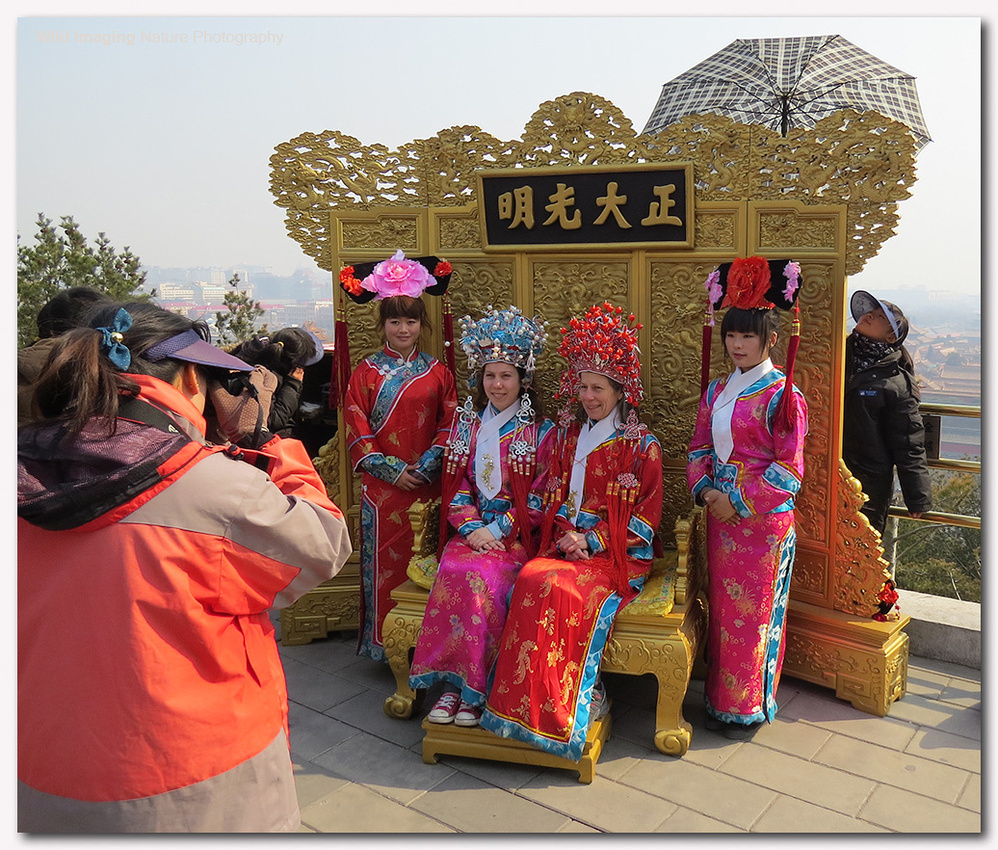 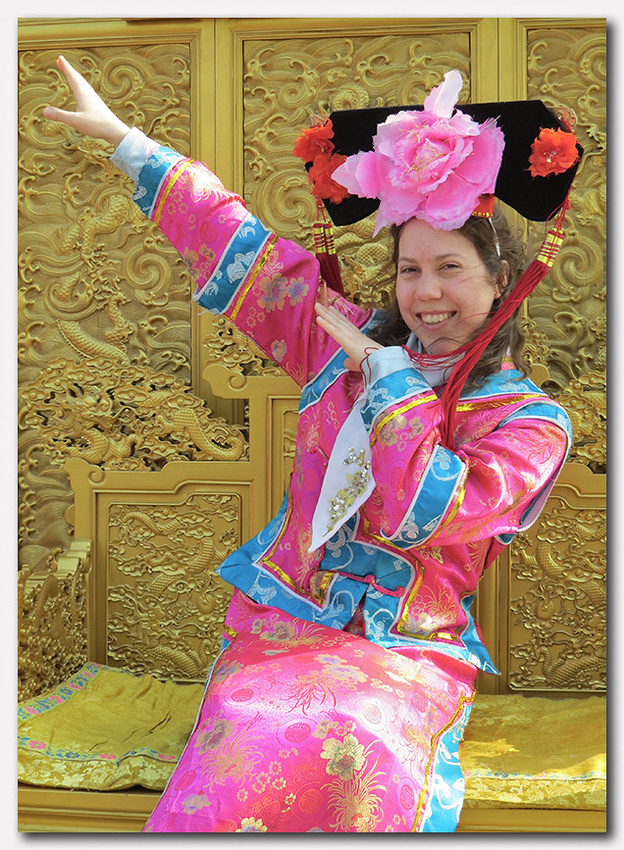 The Usain Bolt pose seemed lost on the people running the stall.  Good job we didn't get Katy to do the Mobot! 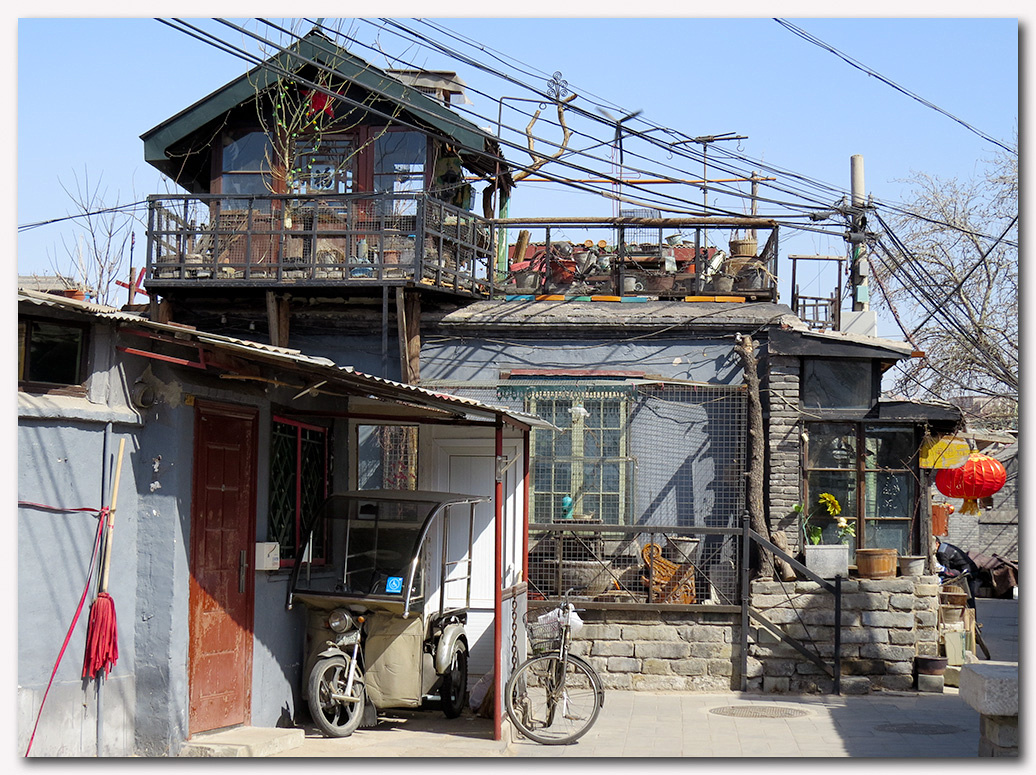 Last but not least, here's a rather unusual example of a house in a Hutong area near the Forbidden City.  Roof terraces seem to be an up and coming thing and are used by some of the tourist restaurants.  Motorbike/trikes like this are a very common mode of transport and are often covered in against the weather.  Bicycles while common, are nothing like as common as they used to be.  Many people use electric scooters and of course there are cars everywhere now.

From Beijing we moved on to Xian, a historic city from the days of the old Silk Road.  More in my next post.

Merv Jones(non-registered)
Great shots of your holiday as street photography is what I like to do like to see the rest.
WildImaging
Thanks Liam. Hopefully they will continue restoring sections of the Wall and more will become accessible.
Liam Culliford(non-registered)
A stunning country Tim, and some wonderful pictures, looks like you all had a great time. I would love to walk along the great Wall one day.
WildImaging
We were surprised too. Apparently we were right at the start of the tourist season and also this section of the wall is quite remote and not visited nearly as much as the sections closer to Beijing.
Monique(non-registered)
Amazing how beautiful the Wall of China is, but even more astonishing how few people are visiting it. Or did you get up really early to get photos without any other tourists?
No comments posted.
Loading...
Subscribe
RSS
Recent Posts
Mr Badger Works for his Dinner How Many Badgers use my Garden Path? A Badger in my Semi-Urban Garden China Trip 2013 - Xi'an and the Terracotta Warriors Woodchat Shrike at Chew Valley Lake 2013 Arctic Terns at Apex Lake, Burnham-on-Sea Beijing and the Great Wall of China Birds Photographed on China Holiday 2013 With Canon SX50 HS White Fronted Goose at Sharpham on the Somerset Levels Twite at Aust Warth
Keywords
Somerset Badger Bushnell Trailcam Bushnell trailcam Shapwick Heath NNR RSPB Lodmoor great white egret Peanuts Bridgwater
Archive
January February March April May June July August September October November December
© WildImaging - All Rights Reserved
Powered by ZENFOLIO User Agreement
Cancel
Continue